Washington Redskins By the Numbers: #8

Share All sharing options for: Washington Redskins By the Numbers: #8

I'm honestly torn. We said from the beginning that this was not going to be a list of the greatest Redskin to wear each number. There are three guys I have in mind today, and since #'s 7 and 9 are just not really debatable, I will put #8 up to a vote.

First, there is Mark Brunell. He might be more of a reminder of a few lean years in D.C. than an example of an all-time great Redskins QB. But I have been a fan of Mark Brunell since he came into the league. The Packers brought him in as a 5th rounder in 1993 and he rode the pine behind a certain #4. The Jaguars rescued him in 1995 and he made a name for himself as a run/pass QB. He was fun to watch on Sundays and I'll never forget how he knocked John Elway out of the playoffs in a year where Elway should have made it to the Super Bowl (1996). In that game, Brunell looked like he was John Elway, breaking off long runs to keep drives alive and lock up the victory. After his first season in D.C. I found myself sitting directly behind Brunell at a Nats home game. I'll never forget how conscious he was the whole night of how he might be in people's way, sitting low and always asking those around him if they could see. I didn't ask for his autograph. I just held my hand out and said, "Thanks for being a Redskin." After a few more beverages though, I couldn't resist. I said, "Mark, how great was it to send Elway home in '96?" He smiled and said, "Man, that was one of the most fun games I have ever played in."

And wasn't it the ol' 8 car that threw 2 deep bombs to Santana Moss to beat the Cowgirls on Monday Night Football? God, that was a great night. Let's watch it again, shall we (you even get some bonus footage of another great win over the Cowgirls):

Second to bat is a second round draft choice in the 1988 draft. A KICKER. No, Vinny Cerrato was not the GM back then. We actually drafted a kicker in the second round named Chip Lohmiller. And he came through for the franchise in a pretty big way, with a pretty big leg. In addition to dropping 149 points in 1991 on his way to the Pro Bowl and on the Redskins' march to the Super Bowl, he showed up with his insanely strong leg against the Cowboys on Monday Night in Week 2.

It is rare to be able to say that a 2nd round choice was spent wisely on a kicker. It is even rarer these days to say that a 2nd round pick was even spent, given that we seem to never have them (except when we have 3 in one year). Although Lohmiller was out of the league by 1996/1997, I think we can all agree that he was a heck of a player, and one we tend to think of fondly.

The third #8, and today's wildcard is a player the Redskins drafted in the 6th round in 2000. He spent his rookie year wearing #8 during a hell of a turbulent time in D.C. I am, of course, referring to Todd Husak. He is not just in the running because he endured a season that saw a star-studded roster implode on Norv Turner, but because he was nice enough to spend some time yesterday afternoon talking to me about it. 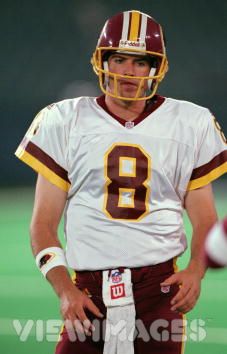 Sugar: Todd, thanks for talking with us today. You have some big shoes to fill--we just interviewed Ali Haji-Sheikh two days ago.

Husak: (laughs) That's awesome. I'm happy to speak with you.

Sugar: As Kevin and I were looking at players who wore #8, your name jumped off the page--here was a guy who played in literally one of the most absurd years we can remember.

Husak: (laughs) Yeah, my rookie year was in 2000. That roster had Jeff George, Brad Johnson, Norv of course...on defense we had Deion, Champ and Darrell Green. There were four #1 overall draft choices on that roster. And we had nine first rounders on our defense.

(I expect our commenters to pull those out)

Sugar: Oh man...you had me at Jeff George. What can you tell me about Jeff?

Husak: Jeff George was one of the most talented QB's I have ever seen--any of us had ever seen. He had crazy abilities. He was polarizing in that he didn't seem to put it together in a way that added up to wins. But we loved him. He was great to me and he was just a really funny guy. I enjoyed playing with him a great deal.

Sugar: Anything stand out to you about that season off the top of your head?

Husak: Well, that was the training camp that they charged people to attend. Since they charged money, they could serve alcohol. And the crowds that summer were just ridiculous. Though they tried to make it kid-friendly, most people were having a pretty good time drinking and carrying on. There were thousands of people watching us and they would cheer when we made good plays and we would hear boos on the bad ones.It was an absolute party atmosphere.

Sugar: As you well know, we don't take kindly to the team out of Dallas here. Any memories of games against those guys?

Husak: Yeah, actually Lavar Arrington knocked Troy Aikman out of the league that year. That was pretty crazy.

Sugar: You got any other stories you want to drop on us?

Husak: (laughs) Well, you know I used to run against the 1st team defense during the week and Deion would constantly lay into me. Deion and I got along great, but he was always busting my chops. My M.O. that year was to shut up, keep my nose clean, and work hard. In fact, half of the entire team probably didn't know what my voice sounded like. One day after practice, I don't know what happened, but I probably had heard Deion chirp at me one too many times. I asked him if he was planning on playing baseball that summer and he said, "Yeah, why?" I told him "I don't think the Reds need a utility outfielder who hits .150!" I know I gained a lot of respect that day from some of the veterans and even from Deion.

Sugar: That's great! Thanks Todd for your time and we all wish you the best.

Todd led the Berlin Thunder to the World Bowl championship in 2002, backed up by none other than Tim "The Dream" Hasselbeck. Todd Husak worked as a color man calling Stanford football games on the radio last season. He will be back at it again next season. He is giving it his all in the commercial real estate business out in Cali and was fun to talk to.

I hope I have given you all a choice worth chewing on today. I'm gonna start needing some day-ahead suggestions from you guys. It is going to start getting tough. After tomorrow of course.