B-Mitch to join the Redskins Ring of Fame [wusa9]

"I was throwing to Devin a lot when we started the workouts and he was really doing great. Just with route running and understanding where he needed to be on the field ... it was a lot better than last season. He was off to a great start" before the injury."

Holmgren says everyone needs patience with Zorn and Campbell [WaPost]

Actually, the specific accusation is that the consensual sex took place on the day before the girl's 16th birthday, with 16 being the age of consent in Alabama. Regardless, creepy as ever. Where are you meeting 15-year old girls?

Javon Walker tells Raiders he just had knee surgery, which was news to them [nfl]

Kellon Clemens still expects to be the Jets starter [cnnsi]

Fantasy Implications for McFadden: Lorenzo Neal to the Raiders [nfl.com]

Derrick Mason to miss all of training camp with shoulder surgery [nfl.com]

Mark Sanchez's girlfriend is hotter than yours, he has an awful tattoo [deadspin] 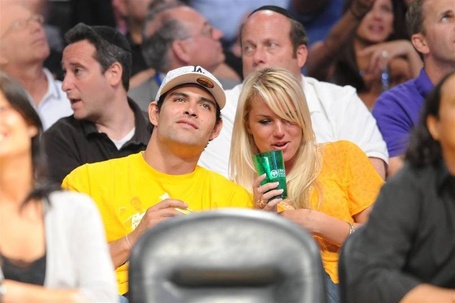