Good day to all of you out there fighting to keep hope alive. Time to dust off the ol' series that serves up the tastiest Kool-Aid in town. Time to dig deep for reasons why our beloved Redskins remain in the hunt for a Super Bowl sooner rather than later. Time to break out the italics, because the latest chapter in the Boldly Hoping saga continues now.

I have been dreading this look at our secondary. Like many of you out there, spending more than 2 seconds thinking about the state of our defensive backfield is impossible without re-visiting the tragic death of Sean Taylor. Laron Landry and Sean Taylor were a wet dream standing back there. There is no need for me to further spell out the destruction they would have brought to this league, as we all dwell on it still. Let's move that to the side for the moment and look at who is there now.

I am continually surprised when I find myself in an actual debate about the skills and impact of Laron Landry on our defense. People whose opinions I don't easily dismiss argue he just isn't a force and doesn't make enough plays to be considered an elite player. They argue that he doesn't seem to be around the ball the way Taylor always was and that he doesn't change the game the way Taylor always did from a turnovers perspective. I get names thrown at me...Ed Reed, Troy Polamalu, etc. To be frank, they have a point. But this debate is not one-sided. First thing first--the Reeds, Polamalus, and Sean Taylors of the world are beyond elite. They are otherworldly and their greatness is exceeded only by their scarcity. The point being that there are players in this league that are great players that aren't on the same level as Ed Reed (for example.) So I am unprepared to judge Laron Landry by that standard today. It is easy to look great next to Sean Taylor, and then become invisible when it takes a 7th round draft choice playing beyond expectations to lock up the spot beside him. For the sake of registering an opinion, I do think Laron is a special player, capable of taking over games in the defensive backfield. He has the speed to impact the deep passing game, and the power to impact the running game (can we not talk about the Brandon Jacobs train that ran him over last season?) Most importantly, it seems to me that he has the mean streak in him necessary to want to be a physical, nasty presence back there. I believe he was making a large impact last season by taking away a side of the field for example against teams trying to flood intermediate and short zones. At FedEx, I watched him before most plays and witnessed how he played mind games with the opposing quarterbacks, starting up and moving back, or starting on one side and sliding over, or up. I do think his presence was the determining factor in a few games last season, and what at times seemed like his disappearance was nothing more than the offense going away from him. However, to make the leap to elite status he has to turn up the heat in the turnover department. He was tied for 5th among defensive backs last season in forced fumbles. But his INT total--2--is not where we need it to be. In the opener last season, Eli threw one right through his arms. That play (that kind of play) simply has to be made. Ed Reed does not drop that ball...EVER. And the exciting thing about Landry is that with the ball in his hands, he is as explosive of an athlete as there is on the field. He has to put himself in that position more. Because even with relatively young, talented corners on the field for us next year, it will be Landry that will have to dictate to opposing offenses what is there and what isn't. While you may argue the point, you can't argue that some bold hoping is starting to take place here!

Speaking of our corners, let's get past whether DeAngelo Hall is overpaid or not. It doesn't matter. He's 25, a starting talent for most teams (including ours), and he is a Redskins fan. That is enough for me to trot out some serious hope. Hall and Carlos Rogers theoretically represent one of the better CB tandems in the league. Rogers turned the corner last year and despite showing a few signs of ego/attitude at the end of last year when it came to playing time and his contract, he remains someone we will have to count on to lock down the bigger, physical receivers in this league. It is my hope that the Redskins lock this player up long-term in the course of this season. Cornerbacks with the ability to cover man-to-man are a valuable commodity in this league, and especially in a year when there does not appear to be much in the way of top-tier talent coming out of the draft, securing the position is imperative.

And don't think I have forgotten about Captain Steubing. Smoot is a fan favorite, and as a 3rd corner, is a luxury that a lot of teams don't have. He is no up-and-comer that is trying to work his way into the top two. He is an established veteran used to being a starter. If our top two corners do their jobs, it will be Smoot that gets thrown at most, and that is something that should favor the Redskins. He has proven he is able to catch the ball and he has exhibited the kind of toughness and mental resolve that you wish every player had. Plus he is an absolute riot jawing with opposing players, fans, his own teammates, refs, himself, etc.

Finally, back to where we started--safety. IS Chris Horton for real? For a front office that stupidly prides itself on paying whatever it takes to land splashy, big-name players, Horton was an absolute breath of fresh air. A 7th rounder that gets named NFC Defensive Player of the Week in week 2? It took him a while to be in the right place on the majority of plays, but his ability to be in the right place when turnovers were at stake (especially early in the season) is something that some players just have. Personally, it gives me great pleasure to see a guy play his way into our starting lineup that wasn't the focus of some huge off-season saga. Really harkens back to the days where homegrown talent was the rule, not the exception. Year two will hopefully be the pudding that bears the proof that he belongs on the field now and for a long time to come.

The Redskins were #4 in team defense last season. Turnovers, sacks, "big plays"...all still largely elude this unit and ultimately tell the tale of why they are not perceived by many to be a truly great defense. The addition of Haynesworth should help the secondary as much as anyone else on this defense if he does in fact increase the pressure on opposing quarterbacks. Another pass-rushing LB would do the same thing. As we sit right now though, our defensive secondary is as sound as we could hope for, and has the juice to rank as one of the best in 2009. You asked for it and you got it...Boldly Hoping where no hope has helped before. 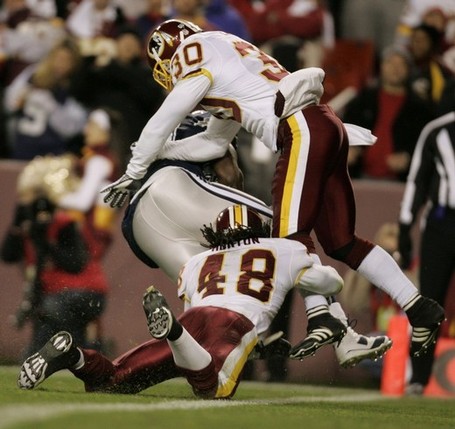