Derrick Dockery's brother, Cedric Dockery, will be available as a late round pick in the NFL draft. He missed half of the 2006 season with a torn ACL, but returned to the field in 2007 and in 2008 he was named honorable mention All-Big 12 by The Associated Press for his Offensive Guard play with Texas.

Positives: Athletic frame with room for additional growth. … Flashes explosive upper-body strength. … Good leverage. … Gets under his opponents' pads and can drive them off the line to create a hole. … Plays with some nastiness. … Looks to pancake his opponent. … At least adequate initial quickness. … Physical use of hands to engage the defender. … Looks to help his teammates. … Good bloodlines. … Brother, Derrick, is a former UT standout and now plays for the Buffalo Bills.

Negatives: Inconsistent in many phases of the game. … Inconsistent hand placement and has only marginal hand quickness. … Drops his head too often, resulting in missed blocks in both the passing and running game. … Struggles to keep his feet when blocking on the move. … May still be favoring his knee. … Needs a medical check on his right knee due to the surgery undergone in 2006 after tearing his ACL.
http://www.cbssports.com/nfl/draft/players/517018 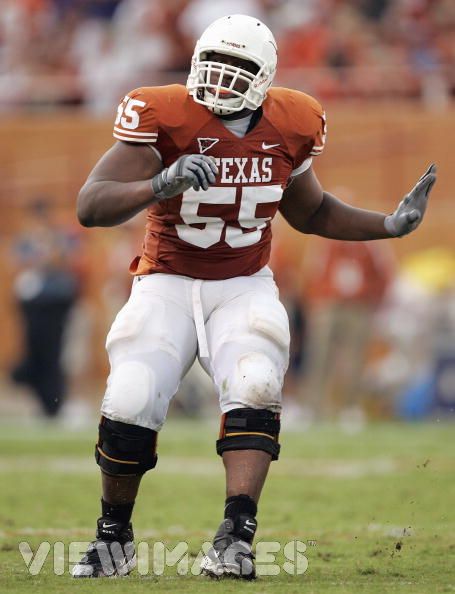 Here's a recent video interview of Cedric Dockery at Texas. He's already engaged, loves God, and seems to be a really genuine guy. It fits the mold with everything I've heard about Derrick. (starts at 3:00 mark)