Share All sharing options for: 7th Round Draft Pick: Getting to Know Eddie Williams, FB, Idaho 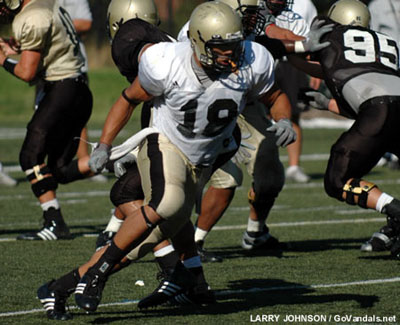 Looks like depending on where you look, you might see Eddie Williams listed as a TE, but ESPN has him down as a FB. On NFL.com, his combine stats:

6'1", 239 lbs. He participated in the bench press drill and finished 7th among tight ends with 23 reps---or 2 less than the kicker out of USC that got drafted by Dallas, David Buehler.

Here is what ESPN Scouts, Inc said about Eddie:

Williams has upside playing an H-back role. He is a reliable target in the pass game with soft hands. He has elusiveness to make the first defender miss.

Williams looks like a fullback and plays like a wide receiver. His production (54 catches, 687 yards, six touchdowns) and leadership made him the team's 2008 Most Valuable Player. And his versatility put him on the NFL draft map. Whether it's at fullback or H-back, the versatility of the first-team All-WAC pick could make him a tough player to keep off someone's roster next September. Had an arm span of 31 3/4 inches and a hand span of 9 inches at the combine.

Looks like Vinny went and got a pretty decent athlete. Again, you have to hope this guy turns into a special teams contributor in the short-term. The Skins roster going into camp is short a decent amount of bodies. A seemingly throwaway pick like this has a shot to make some noise in training camp. Mike Sellers won't be here forever. A guy like Eddie Williams could earn a living in Washington, D.C. at FB. And 7th rounders don't break the bank either.

Now comes the mad dash for undrafted free agents. I believe Ian Johnson from Boise State is still out there. I would love to see him get a shot here.

What are the undrafted free agents out there you want to see come to town?