Share All sharing options for: 6th Round Draft Pick: Getting to Know Robert Henson, LB, TCU 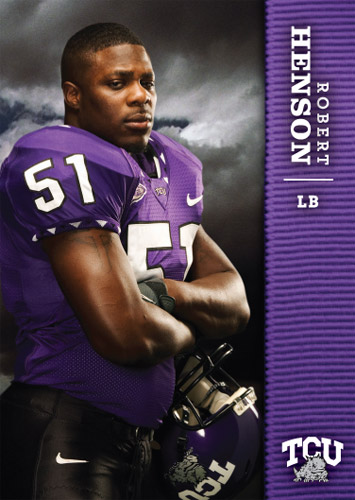 ESPN Scouts Inc. (which means Todd McShay I think), said this about Henson:

Henson has ideal size for the LB position. He displays good fluidity with his play and flashes some explosion. However, he needs to improve his overall footwork and instinct.

I have been flipping between ESPN and NFL Network and much to my dismay, there is/was no round table discussion on Robert Henson. This is the second LB the Skins have taken today. I like drafting LB's in these rounds because this is where you find your special teamers. An interesting LB note is Charley Casserly has Fincher starting for us in place of Marcus Washington. Like many of you out there, I love Fincher. I have serious doubts that either Glenn or Henson could push past Fincher or Chris Wilson on the LB depth chart, but if these guys can get serious about wanting to contribute sooner rather than later, our special teams unit might get a real shot in the arm. Henson looks like a player. And TCU typically plays some pretty good defense.

I won't blow sunshine up your five-hole by getting all giddy about a 6th round LB. But with limited selections in this year's draft, paying some attention to our depleted LB corps in the hopes a couple of these guys pan out as long-term depth options for our defense seems pretty smart to me.