3rd Round Pick: Getting to Know Kevin Barnes

Share All sharing options for: 3rd Round Pick: Getting to Know Kevin Barnes 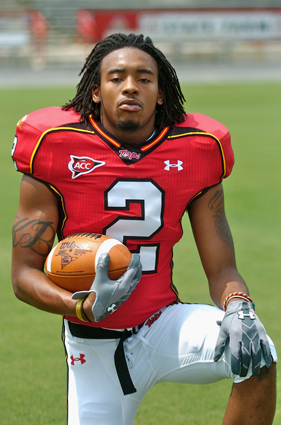 Notes:
Redshirted in 2004...Played extensively as a backup and on special teams in 2005 and 2006...Took over a starting job in 2007 and had a breakout season...College career ended prematurely in 2008 when he fractured his shoulder blade, which required surgery...Was a member of the Terrapin's leadership committee...Prior to the injury some felt he had legitimate Day One potential...Underrated prospect with nice triangle numbers who could be available at a value point on Draft Day.


Some highlights from an interview with Kevin Barnes from NFL Draft University:

Scott Porter: What are your biggest strengths as a football player?
Kevin Barnes: My size I see as a major strength. I have an advantage of being a big cornerback who can move like the little guys can who play the position.

Scott Porter: What type of player and person is an NFL team getting in Kevin Barnes?

Kevin Barnes: They are getting a well rounded individual who has never been in any trouble and will never get into any trouble. I was raised well and well disciplined, I grew up having authority and that goes a long ways.

Scott Porter: Did you have a favorite player and team as a kid? Kevin Barnes: I grew up in North Carolina, but the Carolina Panthers were not a team when I was younger so I grew up loving the Dallas Cowboys and became a big Deion Sanders fan.

The Redskins blog brought to light his outstanding Wonderlic score of 41 and his rehab back to 100%. The WaTimes article had some interesting analysis:

In some ways, he might be better-suited for the pro game than college. He faced so much one-on-one coverage at Maryland that his ability to take risks for a greater payoff was negated, and the possibility of receiving help from safeties in pro defenses might help him exploit his size.

Here's an absolute sick hit he laid against Cal. I was at this game and oh man, what a hit. Wait for the present at the end of the video. Yahoo Sports also has a small montage video of KB.