Share All sharing options for: Chris Wilson Moving to Strong Side Linebacker 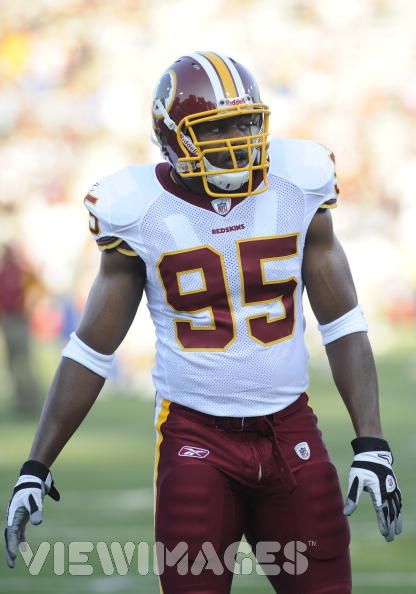 Chris Wilson was on Doc Walker and Kevin Sheehan's 'The Locker Room,' yesterday talking about Chris's move from DE to Linebacker. I paraphrased the interview below, or you can listen to it in full here.

Doc: Chris, you're moving away from the line to linebacker. Are you OK with this?

Chris: Hey, it enables me to be on the field more often which is what I want.

Doc: Have you played linebacker in HS or college before?

Doc: OK GOOD! I can sleep tonight. You attack the QB so well from the line and I'd hate to see the Skins move a player away from their natural position. But if you've played it before, then I have no problems with that.

Doc: Who approached who about making the switch? Blache or did you ask?

Chris: KO (Kirk Olivadotti) talked to me. We want to try this early before mid-season. If it doesn't work...then I could go back to DE. I'll still get to the QB...it just makes me and the D more versatile.

Doc: What linebacker position would you play? Stud?

Chris: I'm used to huge guys coming off the line.

They cut Chris loose at this point, but Doc was more than satisfied Chris could make this adjustment.

Doc: This is a whole new skillset which worried me at first, but the fact he has played LB before in HS and college relieves me. I like it.

This makes the Sanchez rumors a lot stronger, eh? Chris went to Northwood University, which is located in Michigan. He played for the British Columbia Lions in the CFL and was part of the defensive line the year they won the Grey Cup in 2006.