Daily Slop: Orakpo the new rumor? I give up guessing.

Share All sharing options for: Daily Slop: Orakpo the new rumor? I give up guessing.

Casserly gave Ditka the No. 5 overall selection for all six of the Saints' picks plus their first- and third-rounders in 2000 in the NFL's biggest trade in 40 years...Ditka chose Williams, two spots before Casserly took Georgia cornerback Champ Bailey.

Casserly was fired by Snyder three months after the lopsided deal so that the impetuous, young owner could run the team through his own man (Vinny Cerrato), but there's no arguing that acquiring Champ, LaVar and Jansen for Ricky Williams is one of the greatest trades in Redskins history.

Ravens not giving into Card's demands for 1st and 3rd for Boldin [nfl.com]

Hogs Haven will be live blogging the draft from Fedex Field this Saturday(I'll be interviewing and blogging the day...including interviews and pics with cheerleaders, fans, and hopefully a couple players and coaches. Also Zorn's speech, so if you can't make it over to Fedex, can always have your laptop open by the TV) 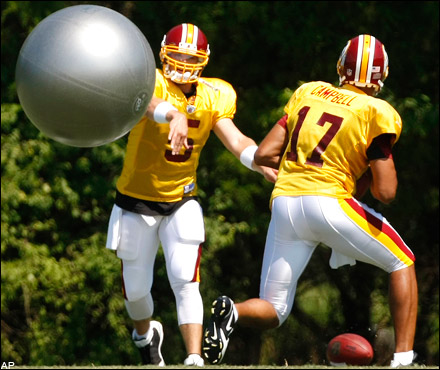