Share All sharing options for: NFC East: Arrest Tallies for the Last Decade

The San Diego Union Tribune posted a webpage allowing readers to do database searches for all NFL criminal arrests since 2000. I thought it would be amusing to take a stroll down memory lane not just for the Redskins, but all the NFC East teams (and of course the Bungles). There are some hilariously bizarre arrests for each team and some blast from the past names we'd like to forget (Bruce Smith DUI).

Since 2000, the Giants are in the lead with 11 arrests, the Skins and Cowgirls are tied at 8, and the Eagles boast a miniscule 6 arrests, though the Eagles win major points in originality (not just your run of the mill DUI and assault charges). 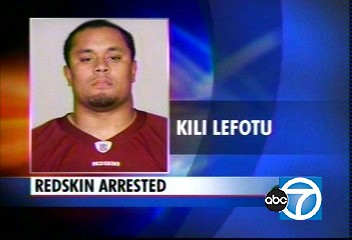 Before I start making fun of the Cowboys, Eagles, Giants, and Bengals charges, let’s take a look at the arrest sheet for our beloved Redskins....

Since Hanyesworth’s off-fields troubles were before his time here, I am throwing that one out. Jim Zorn to date has a clean slate, which I believe is a torch that Zorn has carried nicely from the Gibbs II era. Coach Gibbs was always very vocal to the team about not disgracing the franchise, and this was clearly evident in Joe’s ability to touch Sean Taylor, whom he helped turn his life around after his two run-ins with the law. Here's a look at the Skins' arrests the last 9 years:

Kili Lefotu was a practice squad player and Cash Ataveus I don't believe ever made the roster, so I don't read too much into those. NOW, let's take a look at the highlight arrests for the Skins' NFC East foes:

Terry Glenn (Cowboys) - 12/30/2005 - Cited for public intoxication after urinating outside Jack In The Box restaurant.

Dhani Jones (Eagles) - 3/26/2006 - Charged with failure to obey a lawful command -- a misdemeanor -- after he allegedly refused to stop dancing outside a South Beach club. (Pleaded no contest, paid court costs, cut by team after season)

Plaxico Burress (Giants) - 12/1/2008 - Accidentally shot himself in thigh at New York nightclub. He did not have permit for the Glock pistol.

Why can't there be a youtube video of the Dhani Jones arrest?!??!

Last and certainly least, the Bengals, who have a whopping 29 arrests (it's probably up to 31 in the couple hours since I've posted this). I don't know what's in the water but there is a LOT of battery charges against women, 6 of them in fact. Click to view the entire rap sheet.

[Image via www.acc-tv.com]
Special thanks to our SB Nation friend Arrowhead Pride for the link.