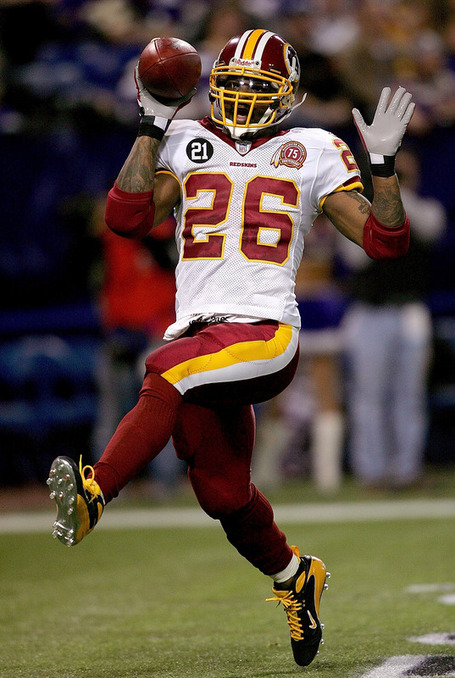 Trey Wingo asked Clinton Portis about the prospect of the Redskins drafting Mark Sanchez and what that would mean to Jason Campbell and to players like him.

Essentially, Clinton said (somewhat to my surprise) that the game is about competition. In a very measured and diplomatic style, Portis said that if the Redskins drafted Mark Sanchez, Jason would have to compete for his job and he would fully expect Jason to win that competition. He went on to say that sometime here the Skins were going to draft a running back high and he would have to compete for his job. I found his demeanor to be on the same level as JC's throughout this whole saga.

I guess I was half expecting to hear Clinton say something to the effect of, "We have bigger needs than QB." And to be fair, he kind of did. They asked Clinton if he thought Campbell could be an elite quarterback in the NFL, to which he responded,

"Yeah, I think he can be an elite quarterback. He has the tools, and ability." Portis laid it out though as he added that it was unfair and unreasonable to point the finger squarely at Jason, since offensive line issues and wide receiver problems have dogged our offense. I think his exact quote was, "I bet you couldn't name any of our starting wide receivers the last five years except for Santana."

The NFL Live crew laughed, but then they unanimously agreed. I found it refreshing and somewhat of a stress reliever that Clinton handled the Sanchez topic so calmly. His lack of any signs of irritation regarding it gave me at least some pause on this issue.

It's true. Competition brings out the best and sometimes worst in people. As the betting men we are, if we had to wager what the effect would be on JC, wouldn't we have to take the upside here? Let's lay out a few facts:

After seeing this interview, I came away with the following:

In just a few short days, we have beaten the Sanchez thing up, but there is one thing I have held back due to my passionate opposition to this selection. If we do get Sanchez, and we do end up with JC and Sanchez on the roster together, the franchise would have what could be a good problem. I would try and sign JC right away to a moderate extension...nothing over the top (nothing you couldn't trade). Then in two years, you make a decision on one of them and trade the other for draft picks. Wait a second...trading a player for draft picks you say? Yes Redskins fans...this is actually possible, and under the rules of this league, it is actually allowed.

P.S. Did I mention that Jay Cutler is whiny bitch?