Share All sharing options for: Chris Samuels' Brother, Lawrence, is a Stud WR

Continuing the brother theme, I recently came across the story and statistics for Lawrence Samuels, the older brother of 6-time Pro-Bowler, Chris Samuels. With all the debate the last several years involving the Redskins need for a tall WR to compliment Santana, it amazes me that one of the core Redskins' kin has been overlooked the last decade.

Lawrence, 'Law Dogg,' Samuels, who was born in 1970, is a 6'2, 215 pound WR that has been tearing up the AFL the last 14 years, winning multiple awards and setting loads of franchise records for the Tampa Bay Storm along the way. His stats, film, records, and off-field accomplishments are posted after the jump. I can't help but think why no one in the Skins office took a look at him given his hands and dedication.

They had to know about him given Chris' longevity with the team, and our scouts do comb through the AFL rosters. Lawrence's off the field accomplishments are just as impressive as his ones on the field. As reported by USAFootball.com:

I relate well to the kids and we interact in many different ways. I try to teach them how to act like a professional," said Lawrence. "My brothers and I were always blessed that we had great coaches growing up; people that were great motivators and who were very supportive of us. They knew the game and taught us how to play the game properly. All of those things that coaches taught me in the past, I try to pass on to the kids I work with. The kids really listen to a guy who is still playing and has done the things they want to do.

Lawrence unfortunately has been recovering from a vicious car accident last October at the age of 38 where he had to be air-lifted from the scene, so any chances of seeing him in Redskins gear is pretty much out. From everything I can see he is doing fine now. However, I can't help but think why he was never scouted for a work-out in the past? 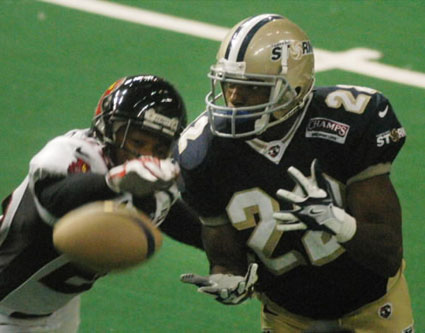 Samuels, 38, is the Arena Football League's all-time leading receiver. He has spent 14 of his 15 AFL seasons with the [Tampa Bay] Storm, and has 1,020 career receptions for 11,708 yards, 168 touchdown catches and three championship rings.

Vinny always said "the tape doesn't lie," so I went hunting for some tape. The minimal videos I did find show some fantastic hands and enough athletic ability warranting at least a workout (yes, being in I.T. the last 10 years qualifies me as a professional scout). Exceptional players that show dedication for being involved in the community make for great teammates and team chemistry, as Ted Leonsis told us.

The Arena Football League was cancelled for the 2009 season, but they look to resume in 2010 with sides close to a CBA agreement.