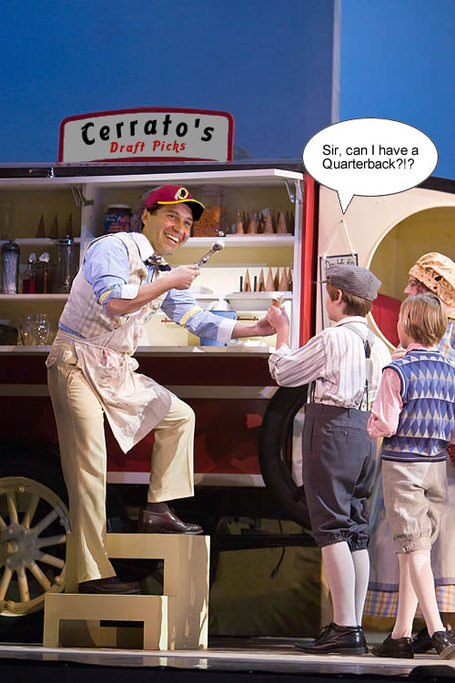 Let me take you back a year to Draft Day 2008. Vinny has pulled off the popularized 'trade back for more picks' move to perfection. The Skins now have THREE 2nd round picks! Multiple starters are on the way! Multiple holes are going to be filled! Then the salesmanship began, as Vinny talked himself into the unthinkable--drafting three pass catchers in the 2nd round. Instead of multiple starters coming in, we got multiple headaches, as one receiver (Kelly) couldn't get off the training table with injury issues, one receiver (Thomas) couldn't get off the line of scrimmage into a proper pass pattern (allegedly), and one guy (Davis) couldn't get out of bed. The multiple holes getting filled belonged to Redskins fans, leaving the burgundy and gold faithful frantically searching for their collective "happy place".

At this point in time, I will say that I believe both Malcolm Kelly and Devin Thomas will come up big this year. I love Fred Davis, and I think he has the chance to make an impact as well, but his selection was at best confusing since Cooley had just been given an extension and Yoder had/has been quietly establishing himself as a serviceable backup. Davis and Cooley have the makings for a deadly TE combo and Zorn is high on double TE sets. At the end of the day, you wonder though how much need we had at TE at that point in the draft.

Enter Vinny. If the year was 1808, Vinny would have rode into town in a covered wagon hawking tonics and elixirs guaranteed to cure every ailment you could imagine. And his sales would be through the roof because he would be his own best customer. Nobody can sell to Vinny like Vinny. And so it was, in 2008, that Vinny looked in the mirror and said:

"Vinny, you handsome devil, what is the only thing better than drafting one wide receiver in the 2nd round? That's right, drafting TWO of them! And even though you spent weeks and months rating and grading all those players coming into the draft, the only card you need to be holding when it comes your turn to pick for the third time in round 2 is the one with pass catchers' names on it! Who cares about defense? Who cares about pass rushers? Oh yeah, and don't forget the age old drafting rule: A punter in the 6th round says you have GIGANTIC balls."

Which brings us all the way to this year and this draft. The closer we get to the 25th, the more certain I become of one thing: If Mark Sanchez is available, the covered wagon and magic tonics will be on display and the banjo music will drown out all reason and rationale. Because Vinny will look into that mirror once again and put a hard sell on the man looking back at him. The Chargers (Rivers/Brees), Broncos (Cutler/Plummer), Green Bay (Rodgers/Favre), Buffalo (Losman/Edwards), Cleveland (Quinn/Anderson)...all examples of teams who had a guy in place that was at least doing a moderate job holding down the fort at QB. (Who did I miss?)

Sure, you can dissect these situations and pull out some major differences from our current one here in D.C., but there is enough evidence here to help Vinny convince himself to go with the young gunslinger out of USC. The lack of contract extension for Campbell, the flirtation with Cutler, the quick trigger finger on the owner when it comes to head coaches, and the history of not being afraid to make an unconventional draft choice all increase the probability that the Redskins could take a QB in the 1st round this year. Here's hoping that the rest of the league thinks like me and is willing to offer something in return for us to move out of the 13th spot. If Mel Kiper thinks there is a chance we will take Sanchez, then there is at least a chance. In 2006, he picked Rocky McIntosh to Washington in a two-round mock draft and in 2007 he was among the first to target LaRon Landry to the Redskins.

Otherwise, let the games begin. At least the 1st round doesn't start until 4 PM this year. I have had a harder and harder time justifying being drunk at noon in recent years to deal with the early round activity of the Skins. But, like Vinny, I have an amazing capacity to wake up early on draft day, stare into the mirror and say to myself, "Ken, you devilishly good-lucking so-and-so, we have a date with intoxication. Just think how great Kiper's hair will look after your 4th Bloody Mary. Just think how smart Vinny will look after your 6th! You get into that kitchen, skip the beer and head straight for the hard stuff. It's going to be a great day that hopefully you will never, ever remember."