Update 4/16/2009 8:30AM: Hogs Haven received a response from Devin Thomas regarding Javon Ringer being a fit for the Redskins:

"Injuries are always an issue when you talk about a running back, and Javon has had injuries. But if he's drafted as a complement to a starting back like CP, that would give him the rest he needs and the opportunity for his body to develop. Javon is a workhorse. Look at all the carries he had last year. He's as prepared as he can be to come in and contribute and he never stops working. If he were to come in as a third down back or what have you, that would keep him explosive and limit his hits until it's time for him to start." 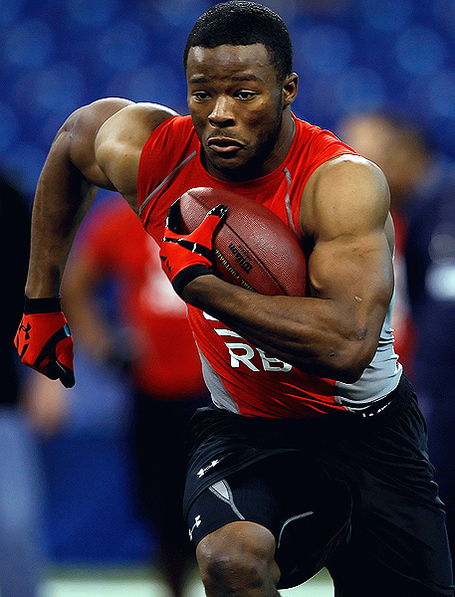 I was watching ESPN the other night when Mel Kiper Jr. mentioned a steal pick could be the Colts taking Devin Thomas's old teammate, Javon Ringer, in the 4th round. The more I looked into Javon's stats, Ringer could be a good option for the Skins with their 3rd round pick.

If you look at his stats for MSU last year, he averaged THIRTY carries a game, which is ridiculous. Ringer carried the team to 6 straight victories after losing to Cal in week 1 and played most of the season with a torn meniscus.

In an interview with scout.com, Ringer responded to a question asking if his past injuries will be an issue with his longevity in the NFL:

No, I don’t worry about that at all. I come from a very religious family and I’m a very blessed person. God has helped me overcome all of my knee injuries, and each time I was able to come back a lot better than I was prior to the injury, and I didn’t miss a beat. When I tore my ACL in high school, I came back strong and I played a whole lot during my freshman year at Michigan State. The following season, I tore my MCL and missed four games. I didn’t have surgery; I just had my knee in a brace for about two weeks. I got out of the brace, rehabbed for about a week and came back and finished the season. The next season, I had a really good junior year. And now, with my torn meniscus, I fought through it and didn’t miss a game. And now, I did my rehab and God has blessed me to come back stronger and better than I was before. I’m still not 100-percent right now, but I’m doing tremendously and I’m able to put up some really good numbers. I’m blessed, and whoever drafts me will definitely be getting a blessed individual. I have a lot of faith in God, and he’s helped me out tremendously with all of my past injuries.

OK, so he likes Jesus. I'm not one to judge. Especially with awards like this playing hurt:

Positives: Work horse. Used in a run-first system which is eveident by his number of carries. Played injured and carried his team throughout the year. He has a strong physique which makes him hard to bring down, and he has excellent ability to find holes. His soft hands allows him to catch passes and he almost never fumbles. His pass-protection blocking is stellar as well.

Negatives: Due to his previous injuries and the near 400 carries he had, scouts feel his body may be worn down. His body is strong, but how much more punishment can it take? He lacks top-end speed, which is evident since he is not 100% healthy right now. The result is someone with good vision, strong body, with a health risk.

Regarding his Pro Day:

It was a fun event. I know a lot of coaches were really impressed with my quickness, change of direction and cutting ability; how I got in and out of my cuts. They really liked that. With me running a 4.42 in the 40, they were really happy, especially with me not being 100-percent. I feel like I did really well with the drills.

Anyone that plays hurt wins major points, and his speed is increasing as he is rehabbing. He could have sat out this year or asked his coach for fewer carries (to keep his draft status high), but instead Ringer did whatever his coach asked, fought through pain, and carried the load to win a string of games. If Javon were to join the Skins, he would be a great compliment to Clinton who desperately needs some carries taken off his plate. Clinton's carrer carries are:

Note: Combing the net, scouts have Ringer being drafted anywhere from the late 2nd round to the early fourth. The Broncos, Titans, and Chargers all worked out Ringer this past 3 weeks. I think these three teams know a few things about drafting RBs!

In the interview linked above, the Redskins were not one of the teams that interviewed Ringer. I would love to get Devin Thomas' take on Javon Ringer since he was on MSU campus helping the Seniors on their Pro Day, and obviously since he played with him for three years.