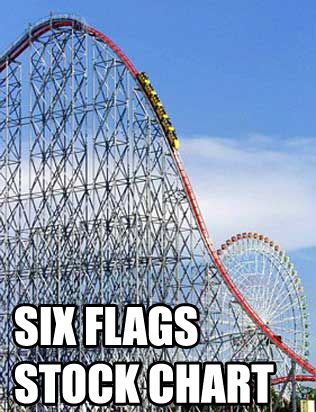 Dan Snyder's Six Flags Inc. will be delisted from the New York Stock Exchange on April 20th after failing to meet the NYSE's quantitative listing criteria.  (The stock, SIX, has been under $1.00 per share since September).

In 1999, the shares traded as high as $41.62, but the stock has been in a downward spiral ever since. The company's debt has mounted over its' large efforts to expand globally and build new rides.

Filing for Chapter 11 is an option for bankruptcy protection, though Six Flags legal advisors are still trying to work out a restructure plan of their debt.

The company, which recently warned it could buckle under its $2.4 billion debt load, said the development would have no impact on its park operations or vendor relationships

Hmm. I'm no Alan Greenspan, but if the stock is delisted, and there is no way for people to publically invest in the company, how is that going to have "no impact" on operations? It has to have some!!

I have an idea!!! Wait for it.....How about Snyder raises the price of parking $5 per car and beer 25 cents per bottle? That should keep Six Flags afloat during the winter months when the park is closed! Not only that, for every beer you buy, the vendor gives you a ticket which you can exchange for Six Flags merchandise! 45 tickets gets you a Six Flags fanny pack, and if you're crafty enough to save up 100 tickets, you can exchange them for a Redskins Snuggie (so you can be as cool as this guy). I am a genius, yes. Loyola College, MD, education right there ladies and gentleman. I can now put away my T-81 calculator.

In August 17, 2005, Snyder’s investment vehicle, Red Zone, began a proxy battle to gain control of Six Flags Inc.'s board of directors. On November 22, 2005, Red Zone announced victory in the battle for control over the loss-making amusement park operator which provided for the removal of three board members and replacement by three new directors, including the CEO, chosen by Snyder. [Wiki]

What's interesting about Dan Snyder winning this battle? He was battling against no other than Bill Gates.