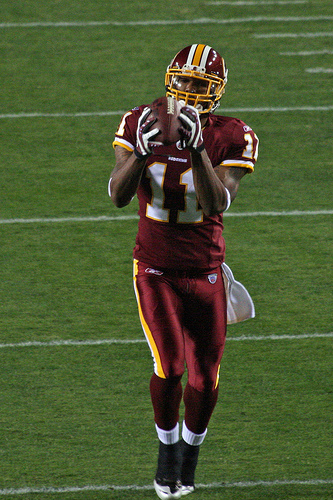 I’ve always had people doubting me. Do I play with a chip on my shoulder?

I’ve got a party mix of chips on my shoulder.

I’ve always faced adversity, but when people doubt me the majority of time I prove them wrong.

This season Redskins fans can expect a more reliable guy, more intense, a guy who’s going to be out there making plays because it’s my time to do that. This is the year I make the coaching staff have to use me.

Fans can expect for me to make things happen, because I want to prove everybody wrong who thinks that Devin Thomas is a bust.

I have continually been stating that Devin will break out this year. He's busted his ass this off-season and all his interviews on Redskins Nation show sincerity to step up.

Devin's involvement in the DC community is also a positive sign he has found his role. The MSU wide receiver and Malcolm Kelly took a lot of heat last year, and as we all know, Skins fans are rather impatient when it comes to production. "Showtime" is a fitting nickname for this situation.

Flashback: The reverse for a TD Devin had against the Giants last year no doubt has all fans anxious for the 2009 season to start already. The last 5 yards of that TD were so fantastic.