When you watch tape of Haynesworth, do you get the impression there are many offensive linemen that can nullify this guy? He needs to move around the defensive line, similar to the way the Packers moved Reggie White around the line. He can't just be camped out in the middle all season. By the end of last year, it became painfully obvious to our opponents that the path to beating us was around the end. Dallas showed the world this with what seemed like 5 or 6 straight off-tackle and sweep plays in one game-defining series. Carter specifically got man-handled at the line by bigger and stronger offensive linemen. I just don't see the same thing happening to Big Al. On any given play, you want to see the offense trying to find where Haynesworth is, and trying to adjust themselves appropriately, possibly causing them to overcompensate and allow for someone else to come uncovered into the backfield. So a lot will and SHOULD be asked of Big Al.

***Is he going to be up to it? That all feeds into the other big story of the last week.

In today's USA Today (as pointed out in the Daily Slop), Dan Snyder insists that the Haynesworth signing is not an indication the team is slipping into old habits. Of course, the rest of the world points to 100 million reasons that might signal they are. When Snyder points out this is a 27 year old defensive lineman that was clearly the top guy available, I think he makes a valid point about some actual learning taking place. How many 7-year deals did he give dudes who were not just 30, but well into their 30's? I would not suggest any of us hold our breath waiting for Haynesworth to play out this contract under the current salary cap rules...but these rules may very well not apply by the time this contract gets into its back-loaded period. And if that is the case, then the second part of this contract is essentially a second contract. So for all of those out there complaining that Haynesworth only plays for contracts, take a closer look at this deal--he will be playing to not get cut before he makes the second half of his money.

So we have a 27 year old player playing for big bucks now, but also trying to ensure he sees the second half of this deal when he turns 31. I am thinking he has plenty to play for and plenty of motivation. You might even give Snyder a nod on this one, if the salary cap goes away of course.

Losing Jason Taylor sucks, but not because he was so great for us. It sucks because we got one year out of him for the 2nd and 6th round picks we gave up. That is just a KILLER! We do get a little younger by releasing Taylor and adding Haynesworth to the d-line. And we do get a lot meaner and physical with the addition of #92. But losing those picks for 3.5 sacks and 1 forced fumble is unacceptable...unforgiveable.

Which is why we need Haynesworth to man up and play every position of the defensive line this year, and in future years. He needs to bring production from the end position as well as the inside tackle position. For us to salvage any sense out of the mess Vinny and Danny got us into, as well as to salvage any hope that Danny is right and he is turning the page, we need Haynesworth to wear multiple hats. No matter where he lines up, it should stay simple for Big Al: 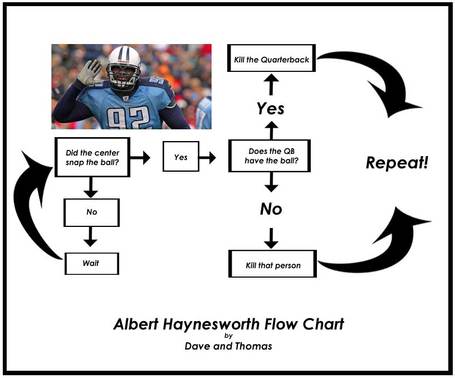