Devin Thomas is back at Redskins Park...Drew Rosenhaus doesn't want to help

Share All sharing options for: Devin Thomas is back at Redskins Park...Drew Rosenhaus doesn't want to help

As reported everywhere, Devin Thomas has returned to Redskins Park to resume voluntary workouts. A lot of Skins fans jumped on Devin for being a no-show, but he had returned to MSU to help his former teammates prepare for Pro day.

I had a feeling Devin had a legit excuse for not being in camp. So much so, I decided to call Drew Rosenhaus earlier this week to get an answer on just that, and also try to setup up a brief (5 question) Q & A with Devin that would bring to light everything Devin has done this off-season in Miami with Santana. Seems like a win-win, right? Wrong. Here's how the call went (no joke): 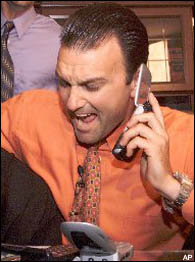 Drew: Hello!
Me: Drew!
Drew: Yea!
Me: Hello, my name is Kevin and I'm a journalist in Washington DC for SB Nation, specifically covering the Redskins. I know Devin Thomas has worked extremely hard this off-season and I was hoping to get a brief Q & A with him either by phone or email, which I'd be happy to forward to your assistants. A lot of fans are skeptical on Devin after his training camp rookie year, but I want to help win the fans back over with this article. (long pause) ... hello?

At this point I look down at my phone, and it is on the main menu, which means not only did the call end, it ended a LONG time ago. If i had to guess, he hung up on me when I said "my name."

I called back 3 minutes later, it rang twice, and he sent me to voicemail. I left a message exactly like the paragraph above, and I never heard back. I will admit I am new to this game of contacting agents, but I would think helping your players generate good press is an easy thing. Ah, what's it matter? Drew has already collected his cut, right? Perhaps I am spoiled since Albert Haynesworth's agent, Chad Speck, took my call and was happy to talk to me. So if anyone is holding their breath for a Hogs Haven/Devin Thomas interview, go ahead and exhale.