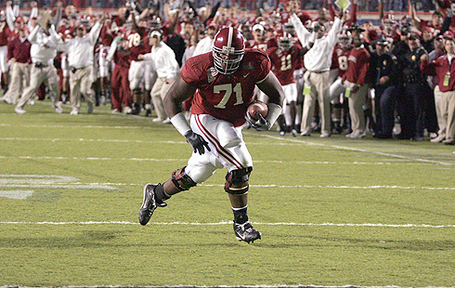 KevinE with the pick...

This was a really tough pick. Realistically, I would have liked to trade back a few spots, but I obviously don't have that luxury. The Bengals have so many holes, it's hard to pick just one silver bullet here. They desperately need a C, OL, DT, RB and WR (to start). With Housh gone, they have Andre Caldwell and Lav Coles left to fill the holes. I am not counting Chris Henry since he'll be in jail by week 5.

A defensive tackle would be HUGE for Who-Dey; however; I don't believe Raji warrants a #6 pick. He has major stamina issues and only having a 6'1 frame for that 330 pounds, his speed off his second step is lacking.

That brings us to the OL. The Bengals ranked 29th in rushing. Cedric Benson is a bit of question mark, but he showed some greatness in his games, and having a stud OL can only help. As for the passing game, Carson Palmer is returning from his injury. As we all recall, Ryan Fitzpatrick spent more time on his back than Paris Hilton. In fact, the Bengals were the 3rd most sacked team in the NFL. Andre Smith provides a major lift in both areas. Let's be real, what are the Bengals with Carson Palmer on the IR? Gotta protect him. Andre we all know has some personality issues, so just make sure Marvin Lewis lays the hammer and Andre's locker is on the other side of room as Chris Henry.