So SB Nation is having each team website man their team's draft room for a community-wide mock draft. That means that later this week, HogsHaven picks at #13 for our beloved Redskins. This is in addition to (separate from) our HogsHaven community draft, that was officially started today. The Lions (Justin) are on the clock.

As for the Redskins selection at #13, in the broader mock draft, it is time to get some feel for what we want. I will make the case for DE/OLB, with possibly an offensive lineman or two that could slip to us for consideration. Fire away with your opinions, commentary and criticisms so we can come to the pick that will best serve the burgundy and gold.

In previous draft posts, we have clamored here for Brian Orakpo in the #13 spot. Thanks to the fact that he has absolutely dominated the offseason workout scene, it is pretty safe to say he will not be around when we are drafting. But the need for his kind of skill set is still there for us. An impact linebacker for us out of the 1st round would be huge for our entire team. I argue that this single addition (after all the other offseason-maneuvering) pushes our defense into some rarified air--a championship-caliber defense. Sure the Skins were 4th overall in team defense last season. But there were things we simply did not do well that ultimately explained how we ended up being the only top 5 defense that did not make the playoffs (I think that is right). We live in an era where pressure on the quarterback is the #1 priority, and the failure to generate this pressure keeps you from being a serious contender. Haynesworth will have an impact on this for sure. But to extract full value from Haynesworth (short of playing him at QB), we need for other guys around him to take advantage of the attention he will attract from opposing offenses. (I am not blaming the defense for us missing the playoffs by the way, just underlining that if we want to beat our chests about a championship-caliber defense, or even a playoff-caliber defense, we simply need to get more pressure on the QB. Period. Don't blame the offense. Don't blame flukey plays. Don't point out high rankings that still weren't enough to get us to the postseason. Get to the QB...and get to the playoffs.)

In short, an impact linebacker for us that can rush the passer from anywhere along the line, drop into coverage, and make sure tackles is going to vault the entire team into a better place. London Fletcher is getting old and Rocky has a lot of mileage on his knees. We need to inject some youth and talent into our linebacking corps. I figure we go Rocky, London, rookie at LB this year, with Blades and Fincher as the main backups. That would be some quality depth at LB, and if Horton and Landry can put together a solid second year together, we would be looking pretty strong up the middle of our defense.

On the flip side, a stud offensive lineman would also do wonders for our team. My fear is that the ones worth drafting in the top 15 will be gone by the time we pick, and the Skins will be left trying to reach for the next best guy, possibly drafting a player way too high. But if one of a couple offensive linemen fall to us on draft day, they must be considered. Since we are not trading our pick in this particular mock draft, we have to live with the fact we get one pick in the first 2 rounds. That means we rank a few of these guys (DE/LB and OL) and take the best guy on the board when we pick.

The group I have is: 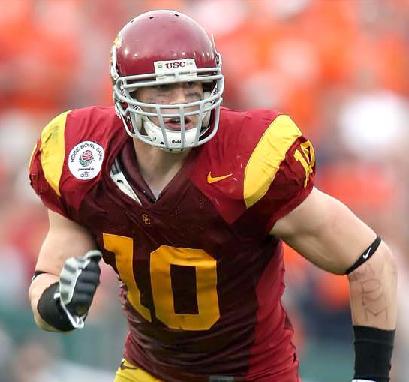 I think if Cushing is still there at #13 we take him. The USC defense has yielded some prize players in recent years. It can be hard to tell just how good some of these guys are since the unit as a whole is so good, but Cush's size, speed and strength translate to the NFL. With Curry and Orakpo seemingly out of our reach, Cushing would be the next best thing. Everette Brown would be a close second, and worth the debate, as he has some serious ability. I think I could be happy adding either of them.

If we go the OT route, looks like Oher will/should be the best available. I can live with this pick, as it fills a need on the roster, and has the potential of giving us a starting right tackle for the next 10 years. He has all the tools to succeed at the next level.

My one thought before I turn it over to the shooting gallery is that I think there will be starting quality offensive linemen in the 2nd and 3rd rounds. I don't think there will be a Brian Cushing or Everette Brown type in those rounds. So part of the reason my strategy would be to go defense is because I think the better player available will be defense and I think we can still pick up a quality offensive lineman in the 3rd round.