The Redskins Will Follow JC To the Promised Land 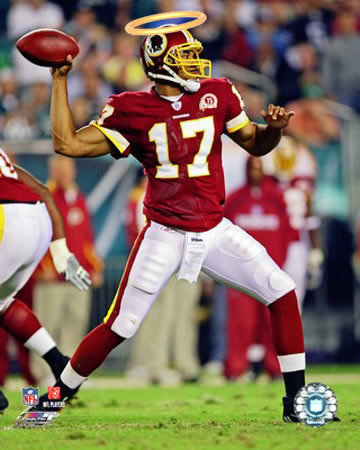 Jay Cutler is a hell of a talent at quarterback. Jesus Christ was a heck of a signal caller in his time as well. But on Sundays this year, the Redskins will be--and should be--dancing with the JC we brought to the prom. Jason Campbell is still the guy.

With Cutler supposedly on the block, there is going to be some noise from folks thinking we need to take the opportunity to make a change at QB. A couple things there:

a) Even if Cutler was an upgrade, is trading for a malcontent conducive to the team-building we have been attempting in Zorn's tenure thus far? Soooooo...we're going to let players who want to be here (Evans) leave, and we are going to find guys who are desperate to leave their teams and actively acquire them? That's going to have to straight up change if this thing is ever going to get turned around.

b) What gives you the confidence that we won't get run over in this trade? I seem to recall a superfluous 2nd round pick we gave Denver in the Bailey/Portis trade. The Redskins are to trading what Chris Brown is to nonviolent conflict resolution.

c) Cutler wants out because his feelings are hurt. Hasn't Zorn proven he is the kind of coach that does not necessarily make your feelings his top priority? So do you really want to bring in a guy, pay him millions (which we would do for sure), and then let Zorn mind-f him the next couple years? Why don't we just hire Phil Jackson as QB coach and let him really get inside Cutler's head and do some serious damage?

d) Here comes the dead horse...QB IS NOT OUR PROBLEM. Unless Cutler can rush the passer, pass block for more than 1.4 seconds, cover a tight end from the outside linebacker spot, or kick field goals and punts, I think we can move him down the ol' priority list.

But that is not going to stop the buzz. So let's take a vote and hear the reasons you think this is either a good idea or a bad one.