Thank God T.O. is not a Redskin

Share All sharing options for: Thank God T.O. is not a Redskin 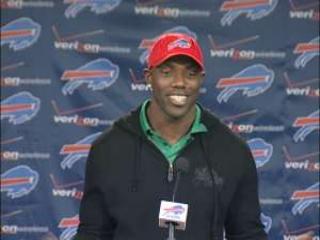 TO's reality TV show, which is slated to begin filming in August, will move with him to Buffalo. Reported by WRGZ Buffalo News:

the show will shadow T.O. and two of his best friends who also serve as his female publicists...

Now, after a string of relationships and off-the-field endeavors, Terrell is ready to re-examine his personal life and finally put a plan into action. These outspoken, vibrant women are more like T.O's sisters than people who work for him. They will function as matchmakers and therapists and also put their marketing expertise to use and help him make his life off the field as successful as his life on it!"

Yea, this doesn't sound like a distraction at all! Having two girls in front of cameras acting as match makers, therapists, and motivators for off-field success! I really hope the cameras and girls are allowed in the locker room and practices. TO was a circus without the cameras! I'm pretty sure this show slipped Dick Jauron's mind. The comments from Bills fans in the article above are great:

- "Marshawn Lynch has the same deal, except his cameras are court ordered."
- "Lets look at some of the hot spots they can go to..... A few bowling alleys in Cheektowaga, The indoor volleyball court on Harlem..."
- "Just what we need - a national TV station showing T.O. having to hop a plane to (insert city here) for the weekend because there's nothing to keep himself occupied with in Buffalo...."

So that begs this question. What would it be like if they gave Fred Smoot a reality show where they followed him around?