Share All sharing options for: Come Back Phillip Daniels 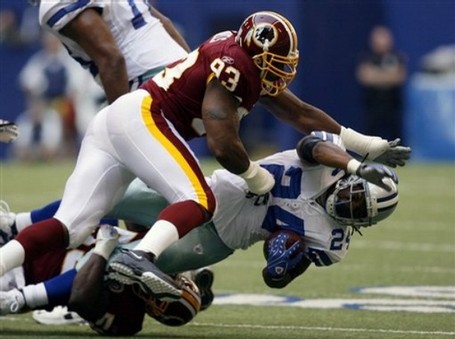 We need you and you know what, we want you. Redskins Nation takes a lot of hits from other fans that mock our free agency team-building strategies. We take abuse in the national media and even in our own local papers. Hey, you guys don't need me to tell you how old it is getting to try and defend the latest and greatest signings. And the Haynesworth/Hall/Dockery additions are the EASY ones to defend. We actually needed talent at those positions, and if you set aside the 'overpaying' issue, which Vinny and Danny have already done years ago, these pickups make a lot of sense. All of these guys will (should/better) start. And they all have proven they can play in this league at a high level. Thank God, because Archuleta and B Lloyd (and Chad Morton) are still just sitting out there like bright and shiny beacons in the night, guiding us all back to dumber times. Where is Doc Brown and the Delorian when you need them?

Phillip Daniels can really help us on a number of fronts. First, he plays a position that currently is undermanned. Check. Second, he is stout against the run on the edge, which we were horrible at last year. Check. Third, he works out hard in the offseason, and is willing to do it here at Redskins Park (which is all of a sudden a reason to flush 2nd round picks down the toilet like corn-filled turds...serenity now!) Fourth, he has been with the team for 5 years and he is a locker room leader. Check. Fifth, thanks to a contract provision, we got rid of him at a higher salary and can bring him back for less. HOLY CRAP! A fiscally responsible move in the midst of a spending spree the likes of which have not been seen since Willie Nelson got all high at that Best Buy back in '92.