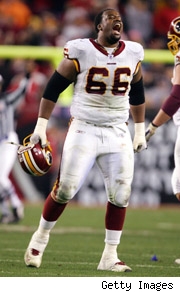 The dream mega-contract that the Bills gave Derrick Dockery to lure him away from the Redskins 2 years ago is the reason why is unemployed today. According to the Buffalo News, the Bills will release Dockery and make him an unrestricted free agent.

Interestingly enough, Robert Royal, former tight end of the Redskins, and current Bill looks to also be looking for a new home. Losing Dockery was a blow to our offensive line when he left. Nobody saw that kind of money being offered to the guard, and the Redskins were ill-positioned to match it. He will most likely still command decent money. Apparently his pass-blocking skills were not where the Bills wanted them--at about a $8-9 million dollar level!

The question I ask you is, would you take Kendall back for veteran minimum (or slightly better) type money, or would you re-sign Dockery to a little more of a robust deal. He is 28 years old, 6'6", 335 lbs. To me, that is the way to go. If Rinehart comes along, the two could actually hold down the guard positions for us for a good 5 years or so which would free us up to attack the tackle spots in the next couple drafts.