Is Dan Snyder Making a Calculated Bet on an Uncapped Year?

Share All sharing options for: Is Dan Snyder Making a Calculated Bet on an Uncapped Year? 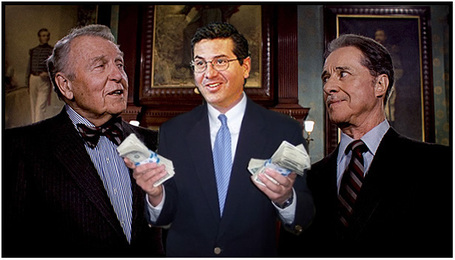 Not too long ago, I exchanged emails with Michael Lombardi, who is at the National Football Post, though I was responding at the time to an article he had written for CNNSI.com.

It was last May, and that week we happened to be hearing grumblings of the impending CBA collapse and its consequences. I asked Lombardi what he thought about an owner that might take a stab at working the cap for the next 2 seasons and using an uncapped year to erase all the cap hell and essentially create a "Get Out of Cap Jail Free" card. My thinking was that Dan Snyder would be just the guy to do such a thing. After all, not only are there obvious reasons why an owner who overspends would benefit on a year with no salary cap, but he could actually CREATE a higher stake in getting that uncapped year by operating in a way that pushes a bunch of money into that first year.

The restructurings of Andre Carter and Antwaan Randle-El reminded me immediately of my correspondence with Mike Lombardi. This is what he said:

He can clearly come clean with his cap in 2010.  If he cuts players in 09, he can book the charge in 2010, or he can simply cut a vested vet (that would be a player that has four or more years of service in the league) in 2010 and then resign him immediately.  All the cap charges would shift into the 2010 season.  Is that clear?

I think the Carter and Randle-El deals fall into the category of cutting players in 2010 (their contracts are designed in fact for us to do just that and absorb a "dead cap" hit in 2010). It remains to be seen who will or won't be cut before or after June 1st, but this will be another telltale sign of the strategy.

I find it extremely easy to believe that Snyder could find some guys willing to work with him on the "cut and immediately re-sign" leg of the strategy next year. After all, this guy hands out big-money contracts like they're candy.

Once the details of the Samuels and Griffin restructurings are announced (assuming Cornelius is restructured), we will have another piece of this puzzle. My guess: the deals will provide something in the way of a decision-to-be-made for the 2010 season giving the team the ability to sock away cap money into a year where it will do no harm to a team that has been living on the edge for years.

I don't sit in on the owers' meetings, but the growing rift between the big money guys (Jerry Jones, Dan Snyder, Kraft, etc) probably isn't getting any better if they also think guys like Snyder are lining up to capitalize on an uncapped year. As a Redskins' fan, I think this might be a genius move on Snyder's part. And if this is what he intends to do (or is already doing), expect to see some bigtime contracts fly out the door to guys like Haynesworth. Because it just won't matter. That is...if you're a betting man.