Long Distance Dedication: Introducing A Redskins Fan in the Desert of Arizona

Share All sharing options for: Long Distance Dedication: Introducing A Redskins Fan in the Desert of Arizona

Hello, Hogs Havenites. By popular request, (or at least ebag and sugar request) starting today, Hogs Haven will have a new weekly column called "Long Distance Dedication", focusing on Redskins issues from the perspective of a transplanted 'Skins fan. (That would be me) While the prospect of having secret admirers from 2000 miles away isn't at all unique to most established NFL teams, the Redskins are a bit of a particular case -- a team that's been largely mediocre over the past 15 years or so, but has still enjoyed some modicum of success, especially for the past few seasons. We haven't been lousy enough to drive away all but the most diehard fans, a la the Bengals, nor have we been successful enough to collect bandwagon fans, like the Steelers, Patriots, and Cowboys. (Have they won a playoff game yet??)

As for me, I was born in Fairfax into an extended family of rabid Redskins fans on my father's side (Bears fans on my mom's side) and attended Georgetown. I lived in Arlington for two years before moving to Lowell, MA, but I've lived most of my life, about 13 years non-consecutively, in Tucson, AZ, so the viewpoint of Long Distance Dedication will be that of an Arizonan. As such, I'm an editor for SBN's Dbacks blog (AZ Snakepit -- An excellent blog, but not thanks to me) and an author for the brand-new University of Arizona sports blog (AZ Desert Swarm). Let me tell you, as a team that's had scant success the past decade and a half, despite being a tradition-laden franchise and founding member of the powerful NFC East, the Redskins are largely an afterthought out here on the left coast. There's a joke that Cardinals fans are only Cards fans when the Cards win and Cowboys lose, but hopefully this year's exciting Super Bowl run will help rectify that unfortunate reality. The Cowboys, Raiders, and Broncos are probably the three most popular NFL teams among Arizonans, as well as the Bears -- there are a lot of Arizonans originally from Chicago, which is very noticeable when the Cubs come to town. Since I've really considered the largely-pitiful Cardinals to be my second NFL team for the past decade or so, you'll notice a definite slant in this column towards comparing the 'Skins to the Cards.

I was fortunate enough to finally attend my first Redskins game this year, when I happened to be visiting DC for a friend's wedding. Scouring StubHub, I was able to get four tickets to FedEx field -- one each for myself; my little brother, who happened to be visiting from Philly at the same time; his best friend, who is a frosh at Gtown; and a fraternity brother of mine who was a Hoya, a DC native, and a true 'Skins fanatic. We sat in the nosebleeds, but the experience was still fun -- unfortunately, it happened to be the Rams game, and... well, we all know how that ended. Still, it was great to finally see the team I love in person -- and most importantly, I was able to finally and truly understand the Redskins fan's game day experience, like a reward for keeping true to the faith for all these years. Even given the total heartbreak of the loss, I wouldn't trade that day for a million bucks.

Sugar and ebag have given me pretty free reign over what I write about, so you're likely to see stories on stats, franchise history, the draft, the impending labor negotiations, and perhaps a rant or two about Vinny Cerrato and/or Dan "The Danny" Snyder. It's their intention that this column will be a bit of an anchor, of sorts, for other long distance Redskins fans to share their own experiences and viewpoints -- so hopefully, some of you lurking 'Skins fans from across the country will feel free to chime in. If you have any particular requests, go ahead to shoot me an email. My address is in my SBN profile.

And yes -- I did cry when I heard that Sean Taylor had died. 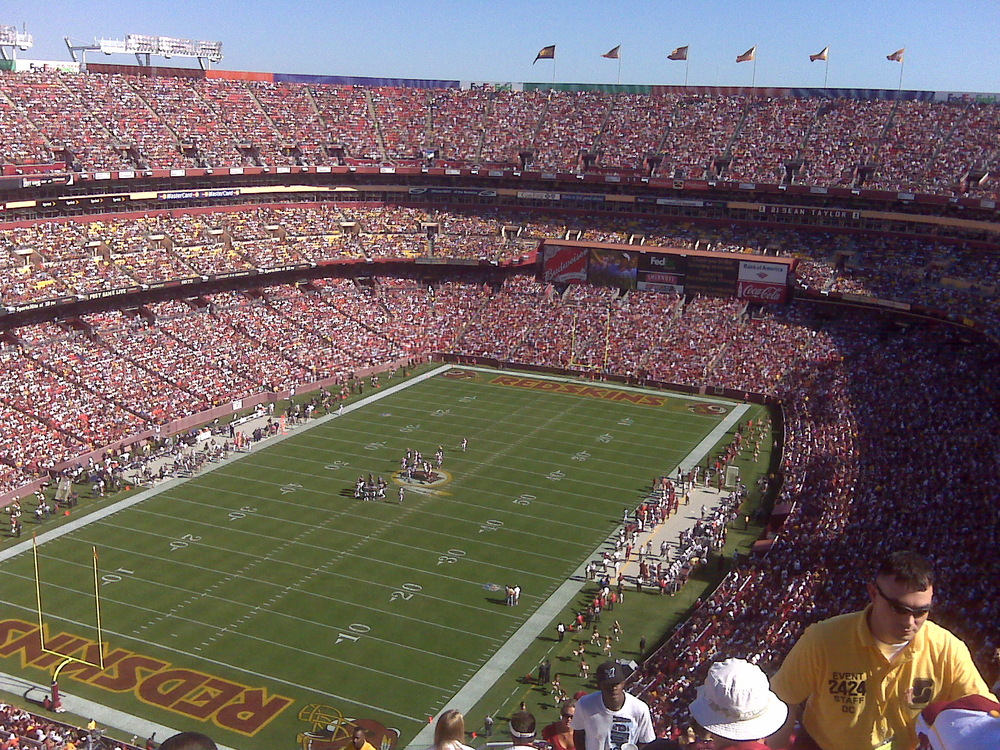