NFL Combine Sucks (Me In To Watching Every Second)

Share All sharing options for: NFL Combine Sucks (Me In To Watching Every Second)

Darrius Heyward-Bey knocked down his 40 in 4.3 seconds. After watching amateur athletes run drills for two days, at least we got that moment. For Terp fans it was great, but everyone had to enjoy watching a guy literally race up 1st round boards. Not to mention his 38+ inch vertical. That guy went and got himself paid.

But the combine is just so hard to watch. The coverage is over-the-top on dudes who will most likely never see the light of day in this league. Some of these guys even I can see have no chance of making the NFL. But that doesn't stop Rich Eisen from acting like they could be making the Hall of Fame someday. Nor does it stop Deion Sanders from doing a commercial with them.

Yet there it is, recorded on my DVR and ready to be watched, with careful consideration for each and every tidbit Mayock serves up. If people remain unconvinced that the NFL has taken over this country, look no further than the amount of viewers who make time in their lives to watch future UPS deliverymen attempt the long jump. You really have to hand it to the NFL...300 pound dudes running the 40? Genius.

You can't run and hide. It's a long way until training camp. The combine is an oasis in the desert. And the Redskins have the 13th pick overall. So one of these guys is going to be wearing burgundy and gold in a few months. I hate it when people read too much into these workouts. I mean, we're talking about people wearing shorts and tee-shirts who have been rehearsing for weeks and months. Can you learn anything from these drills? Sure. But if you geek out too hard on someone because of their prowess on the bench press, it could really set you back, especially when you only have 1 pick in the 1st 2 rounds.

That said, here are some of the guys I hope blew Vinny's skirt up over the weekend, and not just as possible first round picks, but perhaps as guys that could be picked up in later rounds for depth.

I worry that we will find ourselves in a bit of a dead zone at #13 for offensive linemen. Too low to get a top guy, and too high to reach for the next tier. So if we don't go after one of the studs somehow, what about a guy like Lydon Murtha, OT from Nebraska? Looks like he is projected in the 6th-7th round by a few scouting outlets. He really helped himself with some good performances in the individual drills. He was weak in the bench press with 25 reps (versus the top tier bench performances in the mid-30's). But he broke 5 seconds in the 40, and was tops or near the top in the vertical jump, the broad jump, the 3-cone drill, and the 20 yd shuttle. Throw in his size...6'7" 300+ lbs and I think you have a pretty interesting possibility for some young offensive line depth. He has a little history on the injury side, but to me would be a great late pick.

With Betts and Portis holding down the fort at RB, we will not be looking to snatch up any of the top guys at the RB position. But there were a couple guys I saw that made me think they could not only make our team, but make positive contributions soon and in the future. Even though his name doesn't crack ANY of the top performers lists in any of the drills, I liked what I saw in Gartrell Johnson, the RB out of Colorado State. He is built low to the ground, with tree trunks for legs. At 5'10", 220 lbs, he is a cannonball. People will be tempted to make him a fullback, but to me, he would look great as the tailback for the Skins. He is coming off an absolutely studly bowl performance (287 yds against Fresno State in the New Mexico Bowl). In a power running game, I think he could be an impact player. Speed shortcomings, hands issues, and poor route-running abilities will push him deeper into the draft for someone to take a shot at on day 2. Another guy who stood out to me that is being projected as a low round/undrafted free agent kind of guy was Ian Johnson, the RB from Boise State. I always liked what I saw when they were shown on TV (seems like they have been on quite a bit the last couple seasons). Ian Johnson demonstrated good speed and strength. He strikes me as a guy who wants to be a professional. I believe he will give you everything he has. The Skins need to invest a low-round pick on a RB to develop. I would be ecstatic to get one of these guys.

I always enjoy watching the tight ends. (I couldn't resist wording it that way.) The kinds of athletes at this position in this era are sick. They have size, strength, speed, agility, hands, etc. We are pretty solid at tight end with Cooley, Davis, and Yoder. To consider even one tight end with our meager amount of draft picks would be sinful. That said, James Casey out of Rice was buzz-worthy. He played 7 positions in one game once for Rice. He was second in the country this year with 111 receptions, and somebody is going to reach very high for this guy on draft day. If he can avoid getting arrested doing coke in his car at 3 am, a la Matt Jones, he could make some GM look like a genius for drafting a 'tweener type prospect with a super high pick.

For all of the Brian Orakpo watchers out there (of which I am one), he is impressing with his raw workout stats. I'll be putting out another post separately on this guy and some of the other DE/OLB types that will hopefully be dangling out there at #13 for the Skins to draft. I am immediately concerned at how insanely monstrous he is--"workout warrior" players scare the absolute crap out of me. I am not calling him one now, but we have to be careful. These guys look like gods in skin-tight Under Armour workout gear, but it doesn't always translate. And look what Tom Brady taught us, with his famous "Before" photo. 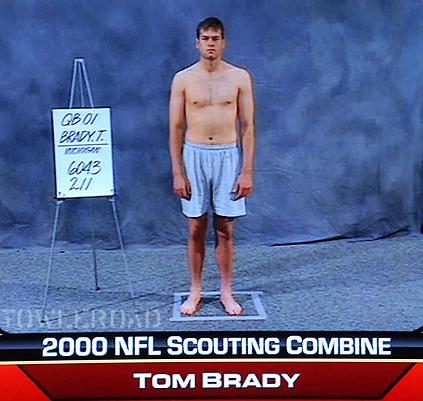 Final Note: David Buehler, the K from USC hoisted up 25 reps on the bench press. The temporary stands they have built around this event that are usually packed while the big men put up mad reps were (not) shockingly empty while this guy did his reps. I could swear I saw Vinny in the front row though, and thanks to Hi-Def, it appeared a river of drool was flowing out of his mouth. I just hope he can control himself enough not to take this kid in the 1st round.