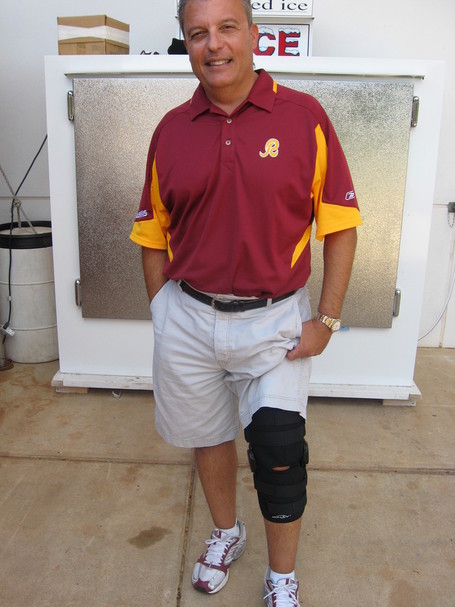 Joe Bugel was on Redskins Nation recently giving updates on the O-line. In short, everyone will be 100%, and they haven't addressed free agency needs yet (since  they're still going through tapes). Being part of the Gibbs regime and policy, Buges always speaks highly of everyone. If I was on the Skins line (I'm 6'2" 160 pounds), I'm sure Joe would say "I'm progressing and show a lot of heart." Riiight.

Buges mentioned Chris Samuels had his knee cleaned up, his triceps have healed, and he is still working out at Redskins Park .

We haven't given up on Pete Kendall yet. We're looking at people at free agency but have not made any decisions.

Casey Rabach is one of the top players I've ever coached at his position.

We're expecting a lot from Chad [Rinehart]. When he was activated towards the end of the season, the light bulb went on. He went back home to northern Iowa but will be back here in March for workouts.

Randy Thomas had major neck surgery, but he is good to play another 3-5 years. That was big time surgery. The triceps injury from 2 years ago still messed him up.

Jon [Jansen] was never 100%, but he is better than some tackles at 85% (as they show a clip of him getting pushed back 3 yards). The ankle injury really slowed him.

Stephon Heyer has come light years from where he was last year. Chris Samuels and Randy Thomas took him under their wing and worked out with him over his first off-season. Stephon has been with us two years and has been hurt for two years. Hopefully this third year is the charm and he can stay healthy.

Justin Geisinger. His rehab is going well. He's a legit tough guy, and I'm not worried about him.

Note: Vinny Cerrato will be on Redskins Nation on Wednesday to talk about the Combine. Hopefully Larry will ask some questions on their process of how they evaluate players instead of talking about  how our current, core players are all "really nice guys."