Michael Lombardi recently wrote in the National Football Post that he thinks we will be looking for another QB in a year. At least partly at the root of this assumption is that we aren't offering JC an extension right now. If he plays well next year, he will walk--if he stinks next year, we let him walk. I don't underestimate this at all, and we all see how the business side of the league plays out around the country every year. Lombardi is someone we at HogsHaven respect a great deal, but I don't think this has to be the prevailing philosophy, and I don't think this is the only path here. So begins another entry in the critically-acclaimed, wonderfully italicized Boldy Hoping series.

I don't deal in stats as much as my partner ebag, but this conversation begs for a few numbers. Using nfl.com's regular season passing stats, here is where JC rates in the league in a few important categories in the 2008 season:

What can we make out of this? Clearly this isn't a resume of a QB bound for Hawaii, but are these the numbers of a QB who cost his team a chance at making the playoffs? I don't think so. We would be quick to point out that Clinton Portis and the running game were, for most of the season, what provided our identity on offense. Even so, Campbell was in the top third of the league in both completions and attempts. This suggests a heavier reliance on the pass than we may have realized. The 13 touchdown passes stand out don't they? With that many attempts, you would hope to land the ball in a receiver's hands in the end zone a few more times. But he also was tops in the league in protecting the ball. Keep in mind that JC started every game for the Skins. Throwing only 6 pickles over the course of the season is impressive.

Some argue that everything was thrown short, everything was thrown safe. The riskier patterns and throws that tend to generate more interceptions were never really tested regularly during the season. Here, they may have a point. Campbell was 24th in the league with a paltry 6.4 yds per attempt. That is just barely more than some of the top running backs averaged per rushing attempt. (Portis averaged 4.3 yards per attempt, Adrian Peterson 4.8, and DeAngelo Williams 5.5!) In today's league, the passing game has to come up with bigger plays on a consistent basis.

Campbell's completion percentage is good enough to put him in the top half of the league, and his quarterback rating (depending on how much stock you place in this formula and metric) is mediocre but not bad.

I don't like to ever use lack of a experience in a system as an excuse for poor performance. You may not expect a player to perform like a Hall of Famer in the first year of a new system, but if they stink it up, they should be cut. Especially when it is clear that this time, the system is going to be allowed to stick around (for at least 2 consecutive seasons!! whoa.) These numbers don't suggest to me that JC stunk it up. For a relatively young player, in what you can fairly call his 2nd real chance at being the "guy" at the outset of a season, these numbers suggest that JC can handle his business in the NFL. A second full season under the tutelage of Zorn offers some rather tasty hope.

Let's not take too hard of a whack at our offensive line today. But let's also not overlook the fact that there was a real breakdown in both run-blocking and pass protection as the season wore on. Opposing defenses dedicated themselves to stopping Santana Clause, and JC was left holding his junk in his hand as no other receiving threat emerged.

The NFL suffers from a dearth of talent at the QB position. Look at some of the guys who took snaps this year: Ken Dorsey, Bruce Gradkowski, Ryan Fitzpatrick...sure they are serviceable, but come on. Not to mention there is not enough talent to push the Kerry Collins', Trent Greens, and Daunte Culpeppers into full retirement yet. We have a guy who is barely above average, but is (by these numbers) just that. And he is still learning. We have some decent depth at the position with a proven resident old guy in Todd Collins and an up and coming gunslinger in Colt Brennan. We're not the Patriots--with Brady and Cassel--but we're also not the Lions. We can build ourselves better around this quarterbacking crew and in so doing would surely increase the performance under center. In fact, we can not afford to ignore other areas of this team to pursue a new QB. Without adequate pass blocking, and without multiple reliable targets at the WR position, no QB can single-handedly do it. Our resources (draft picks and available salary cap) MUST be deployed elsewhere. 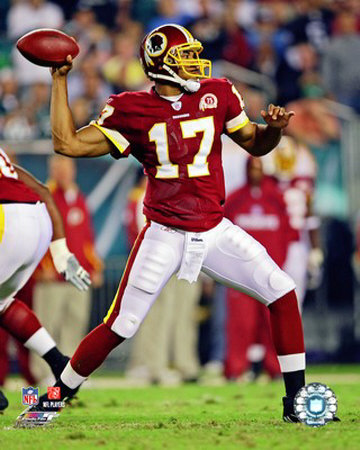 I believe we have a QB we can win with, and this team needs to figure out a way to grow with him and around him. If we do, JC's numbers should improve to upper echelon status, and we won't just make the playoffs, we'll be a threat to win in the playoffs. Boldly Hoping indeed!