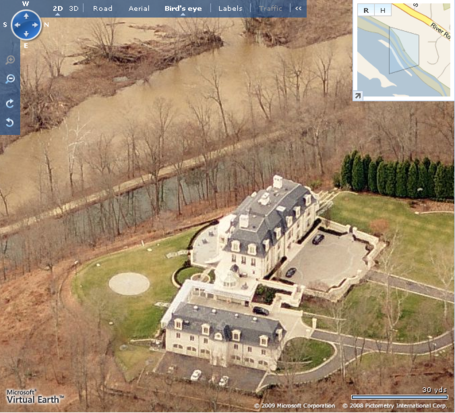 The Journal, a West Virginia news source, has been covering the trials and tribulations of the National Park Service (NPS) whistleblower that called out Daniel Snyder for razing his waterfront trees at his Great Falls mansion.

"Soon after Mr. Danno made his disclosures, he experienced a variety of administrative actions, including temporary reassignment, investigation, frivolous administrative charges, Board of Inquiry, suspension, isolation, permanent reassignment and criminal charges," Noone said. "Mr. Danno was removed from his position as chief ranger and reassigned for more than two years to the George Washington Memorial Parkway, where he was required to commute to Mt. Vernon from West Virginia, to issue picnic permits."

This is something you see out of Law & Order. "Who told you to get in my business?!?! Shut up or you'll be working parking meters in Harlem by tomorrow morning!!" Danno has been a consistently well-respected Ranger, so these demotions are not at all fitting for someone who was simply doing his job. His problems did not end there....

[Danno] also was put on trial in January at the U.S. District Court for the Northern District of West Virginia in Martinsburg for one count of willfully and knowingly receiving, concealing and retaining stolen property with a value of more than $1,000 that belonged to the United States.

Nice! Let's nail the guy with whatever we can drone up. What did they find? A drill, a slide projector, a trauma kit, and some metal signs. THIEF! Not so fast.

At the three-day jury trial in January, witnesses said that they also kept National Park Service items in their homes and vehicles. They testified this was because they didn't have secure storage space on NPS property, and so that they could have their equipment, such as emergency medical gear, available if they needed it.

Luckily he was found not guilty since his peers came to his rescue. The Department of Interior has opened an investigation, but publicly said they have been unable to locate the case the last few weeks. Nice. This story follows the trend with the wealthy, including all the fat cats on Wall Street.

I'm certainly not saying Dan Snyder is to blame for Ranger Danno's woes; however, many people are going WAY out of their way to bust this guy's balls. There is a LOT of people who live on the Potomac, who would prefer waterfront views, but they abide by the law. So why did the NPS brass bend over backwards this time to ignore the laws, and then afterwards punish the guy who was never in on the 'play'? The NPS brass could have simply realized they got caught and moved on, but no. Hmm. Snyder has since paid the $37,000 fines and put the trees back in. I wonder if that explains why Skins fans were suddenly charged for Training camp? Ha. Either way, it's good to see there are good people who stand up to the injustices and corruption of the National services that the taxpayers pay for and trust in.

Special thanks to The Journal, Staff writer, Christina Marnik. She bravely posted her email address and phone number at the bottom of her article. I suspect she'll be cleaning toilets on exit 3 of the NJ Turnpike by tomorrow morning. If you do get canned Christina, we'd love to have you at Hogs Haven. Our benefits include, well, nothing. I'll give you a hug though.