NFL.com recently added 'Offensive Line' to their statistics, and it reveals an intricate look into each team's running game and pass protection. Not surprisingly, the Redskins have allowed a 30th ranked 23 sacks, while the Falcons boast the 2nd best pass protection with a puny 6 sacks allowed. The Falcons offense will be the most difficult test for Andre Carter, Griff, Haynesworth, and Orakpo to date, so we'll see how the Redskins D matches up with a top-tier O-line.

Moving on to rushing, who would have guessed the Redskins have a higher rushing average at 3.9 yards per carry over the Falcons' 3.6 average? It's a little skewed since Matt Ryan is averaging 1.6 a carry while Campbell is averaging 4.3 per run.

What gives the Redskins some hope this week is that over 3/4 of the Falcons rushing first downs come up the middle or to the right side, the strongest part of the Redskins defense. 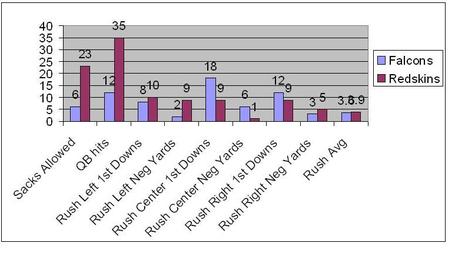 - Offensive line: The Skins take the new play-calling scheme and shoddy line on the road to a dome, which will be deafening for the Guards. If Heyer is slow to get into position to begin with, how is this going to work when he loses a half second of his first step to crowd noise? To account for this, John Abraham will be seeing a lot of double teams, most likely with Portis chipping. The way Heyer has been getting beat, Portis will probably be taking on Abraham at full-speed at least once. All focus should be on keeping Campbell's blind side safe, if the Falcons find another way, then have a plan to adjust.

- Tony Gonzalez: Who is going to cover him? Orakpo is still learning on the job, and Tony Gonzalez will absolutely shred him with his routes. The obvious solution is getting to Matt Ryan. If he has time, there are simply too many weapons for him to throw to. The Falcons don't have that bruising back like Stephen Jackson and Brandon Jacobs, so perhaps for this game, Blache moves Orakpo to his natural DE position full-time. This will also help keep Michael Turner from getting outside.

"Forget about what we've been through that's put us in a 2-5 hole...Everybody in the NFL has talent, what we need is the motivation. We have to look at the season one game at a time instead of the big picture."

It seems obvious, but it's true. If the Skins come in focused and avoid the mistakes that kill them every game (dropped balls, lazy tackling, missed blocks), then they can keep the game close, which is the most we can ask for against an opponent that has won a game previously.