Share All sharing options for: Thank You Chris Samuels: Tribute to a Modern Day Redskins Hog

We all know the retirement is coming, so I thought we'd get it out of the way now and give our thanks to the Redskins' modern day Hog, Chris Samuels, and everything he's given to this franchise.  It may seem preeminent, but let's be honest, the current state of the Redskins and their forth-coming personnel over-haul is not worth risking paralysis.  Chris likely wanted to get his farewell over with, but with the nightmare the front office is currently dealing with, they can't handle any more bad news, especially offensive-line related. It's amazing to think how many moving parts there were over a 3-year span that nearly did not bring Chris Samuels to the Redskins.

Before we dive into all of Samuels' accolades, it's amazing how hectic 1999 and 2000 were. The team was in the process of being sold and multiple people who shouldn't have been in the decision process were.  What led to the Redskins large amount of first round draft picks was kicked off by the Panthers' foolish move to acquire Sean Gilbert.

Defensive tackle Sean Gilbert held out for the entire 1997 season and the Redskins kept the franchise tag on him for 1998. The compensation for another team to sign Gilbert was set at two first-round draft picks. The Panthers foolishly bit and got Gilbert-a good player, but not a high-impact performer-in exchange for their first picks in 1999 and 2000. [Warpath Conf.]

Just before the 1999 draft, Charley Casserly dialed up club president John Kent Cooke and explained the deals he had working. "Charley," John told him, "we need to do what's best for the franchise in the long run."

This sadly was the last time we've heard a quote like this out of Redskins Park. What's more maddening is the introduction of Vinny Cerrato into this process:

However, in late February, Milstein was allowed to appoint an ad hoc general manager, former 49ers director of player personnel Vinny Cerrato, to work in concert with Casserly. Cerrato wanted an office at Redskin Park. Cooke said no, so Cerrato set up shop in a hotel five miles away. "Every time we were considering a free agent," Casserly says, "I had to remind myself to copy some tapes and send them to Vinny. It was uncomfortable, but I told Vinny, 'This isn't complicated. Either you're going to be here or I'm going to be here. We have to do what's best for the Redskins.'"

This is exactly what Casserly did in the draft.

Casserly, who had the fifth pick, set up a tentative deal with New Orleans, which was choosing 12th and looking to move up to take running back Ricky Williams. The teams would swap first-round selections, and the Redskins would get the Saints' other five choices, plus a first- and a third-rounder in 2000.

Ditka takes Williams at #5 and the Redskins take Champ Bailey at #7 and Jon Jansen in the 2nd round.

In the 2000 draft, the Redskins traded their 16th and 21st overall picks (and a 4th and 5th rounder) for the #2 and #3 overall picks, which of course the Skins selected Lavar Arrington and Chris Samuels.  The thing is, the Redskins originally wanted to draft both Nittany Lions.

Snyder, naturally, is looking to State College, Pa., where defensive end Courtney Brown and linebacker LaVar Arrington played. The owner hired two limousines to drive him there to interview the two young men. The Redskins want both, but particularly Arrington.

The Browns knew we wanted Lavar bad, but the Skins did not get goated into trading up to the #1 spot. Browns took Courtney Brown, and thus, Chris Samuels was taken with the #3.

Samuels' 6 Pro Bowl berths are the third-most in franchise history. Can you name the 2 Redskins with the most at 7?

Chris, thanks for everything and you can count on me being there when your name gets hung in the Ring of Fame. 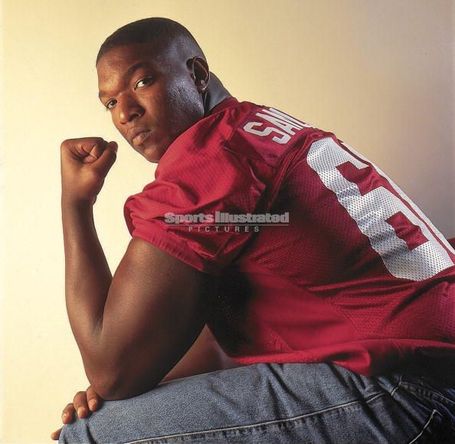