Redskins vs Cowboys: Haynesworth & Corner Blitzing are the Keys to Victory

Share All sharing options for: Redskins vs Cowboys: Haynesworth & Corner Blitzing are the Keys to Victory

Well, it's Cowboys week and if there's ever a time to stay medium, this is the week. Vegas opened the line with Cowboys as 13 point favorites, which America bold-heartedly disagrees with as the line has moved down to -11. In my weekly routine of combing over the opponent's offensive stats, the Cowboys are damn impressive. They average a 2nd best rushing yards per carry (5.1), but only rank 24th in the league in rushing attempts. Offensive Coordinator Jason Garrett has been catching a LOT of heat this week in Big D for abandoning the run, so I expect the Skins D to face a lot of rushes early.

Their passing game is equally as scary with a league leading 11 passing plays that have gone for 40+ yards, while Romo has only given up a measly 6 INTs so far. November is Romo's month, 15-2 for his career, but alas....one of those losses was against the burgundy & gold.

Whichever  team runs the ball well is going to win, and looking at the rushing statistics, it's clear Albert Hanyesworth is without doubt the key to this game.  He was wearing a protective boot for his sprained ankle yesterday, but is expected to play. Special thanks to HH member PommyLee for putting the following graphs together. 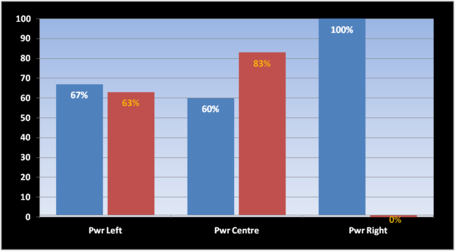 Even though the Cowboys have a lot of success running right in short yardage situations, their success is running the ball left and up the middle. This next chart shows the number of rushes for each team left, right, and up the middle. Just under half of the Cowgirls' big play rushes are to the left. Phillip Daniels has his work cut out for him as this chart shows:

Moving over to the passing game, pressure is IMPERATIVE. The Cowgirls have allowed a 19th worst 22 sacks. Green Bay deserves a lot of credit since they notched 5 sacks last week. Don Capers used a 3-4 scheme and blitzed relentlessly to major success:

"They have a good scheme, they throw a lot of guys around and they have good players who know how to (blitz) and it just made for confusion from time to time," Romo said

Romo has actually struggled against all the 3-4 defenses he's faced. In regards to pressure, Defensive Coordinator Greg Blache prefers to blitz the safeties, but he has changed that up this year. In the squeaker win over Tampa, Blache blitzed all the corners at least once with Tryon drawing the most praise:

"[Tryon] brings that mentality of special teams to defense," [Secondary Coach Jerry] Gray said. "[Now] you've brought in a guy who has reckless abandon to go and make plays. Justin could have blitzed and when the quarterback scrambled away, but he accelerated and didn't slow down until he got his hands on him. That's the mentality they teach on special teams. It carries over."

The Cowboys O-line is banged up, which the Redskins welcome, especially Andre Carter. Right Tackle Marc Columbo is likely gone for the year, and Doug Free will step in, who has never started a game before.

If the Skins show a 3-4 at times, it's imperative they get pressure with Haynesworth in the middle. The big man also takes away the rush the middle...if he can make it through this game without injury, that $100 million contract might just be worth it.