Interview with Broncos' Legend Karl Mecklenburg About Leadership and the Redskins

Share All sharing options for: Interview with Broncos' Legend Karl Mecklenburg About Leadership and the Redskins

I had the fortune last week to speak with former Broncos great, Karl Mecklenburg, after his literary publicist contacted me regarding his debut book,  Heart of a Student Athlete: All Pro Advice for Competitors and their Families. Per Karl's website,  the former Denver Broncos' captain and All-Pro, Karl Mecklenburg rose from being a college walk-on and a 12th round draft pick to a pro career that included six Pro Bowl and three Super Bowl appearances.  Considered the NFL's most versatile player, Karl played all seven defensive front positions. Karl divides his time between his ongoing charity involvements and his motivational speaking for student athletes, parents, and corporate team-building.

Motivation and leadership has been a huge concern for me in regards to the Washington Redskins, and Karl delivered some great advice. The specific topics we covered include:

- Is it imperative to have vocal leaders in the locker room?
- What do high-priced free agents do to a team's chemistry? (Portis)
- Why Jay Cutler is not a leader and DEN wanted him out
- How does a leader fix motivation and focus problems (missed tackles and dropped balls)?
- How does a player stay motivated when the front office is mis-managed?
- Thoughts on Mike Shanahan as the next Skins Coach/GM (this post coming tomorrow)

Hogs Haven: Before getting into your book, I thought I'd start with a question Redskins' Nation would appreciate. Do you still see Timmy Smith and Doug Williams in your nightmares?

Karl: [laughing] Nah. I spoke about this in my section 'Super Bowl & Drugs.' One of our defensive players was basically not there. We were playing 10 on 11, and it got real ugly real fast. That was one of the most frustrating days of my life. One of our defensive players was just spaced out running around out there doing nothing. Unfortunately, the team staff didn't recognize it, and at the end of the year they fired him and fired his position coach. That was a tough deal.

The Redskins were a great team. Don't get me wrong, but Timmy Smith never really did anything else remarkable in his career. It was a great scheme. Your coaching staff put a little wrinkle in the counter-trey. We always played the counter-trey the same way...the Strong Safety would come up on the outside and the OLB would take out one or both of the point linemen...the inside Linebacker would scrape over the top and usually we had the SS free. Well, the Redskins brought the H-Back too, and you just had to block the SS knowing that no matter what defense we were in we played that the same way, and that was something they had never done before. The first series we were surprised by it. After that we made some adjustments and it should have worked, but because the one guy couldn't make the adjustment, we kept getting gashed over and over again. 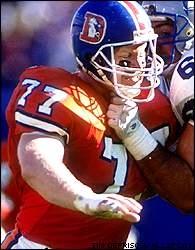 Hogs Haven: Moving over to the motivational side of your book, what happens when the leaders (and by that I mean the captains) on the team are not vocal? When things do go bad, and you hit a string of losses, what is the leader's role? The Skins seem to be in a state of 'we're all professional athletes, we know what we need to do'. Does it imperative that there be a player that makes a verbal impact? It is it a bad sign if no one does?

Karl: The vocal thing is helpful. To me, what is more important is that there is the commitment. There is 4 C's to leadership I talk about. There is Community...that you're a relational person. You're concerned about your teammates. You get to know them...you understand their strengths and weaknesses.

Elway used to go from table to table at lunch each day during the Broncos facility and get to know his teammates and become one of their friends and someone involved with them. So that community piece is huge. Then there's the commitment to the team goal. Then there's the consistency of that commitment and the clarity of that commitment. That's where the communication piece comes in. It doesn't have to be verbal. If your leaders have those relationships with players and that it is consistent and clear, then they can function as a leader just fine.

If there's any inconsistency in that commitment or lack of clarity, then it's very difficult to get people to follow you, especially if they think you're more concerned about your own statistics or paycheck than the team goal/mission.

The Broncos had that problem with Cutler. He was more concerned with his statistics than the success of the team. That's why he's not here anymore. When you're in that leadership position you really have to be someone who can step forward and be a leader in the way I described.

Hogs Haven: That leads to my next question. The Redskins are known for all the high-priced free agents they bring in...how does that affect leadership?

Karl: Right. Free agency in many ways is basically a selfish position. If you're leaving, most of the time, it's because you feel like you're not getting enough money or enough playing time. It's about me, not the team. It's very difficult to bring in free agents who have a team attitude. It's more about where's my money. Who's the star RB for Wasington?

Karl: Yea. Portis. Yea, it appeared that he was all about himself and about statistics. That he wasn't a guy that was going to play hurt or he took himself out of the game all the time and things like that. That didn't sit well here in Denver. That is why they traded him for Champ Bailey. Champ is one of those guys you talk about who is a quiet leader but very committed to the team passion...the team mission to win championships. 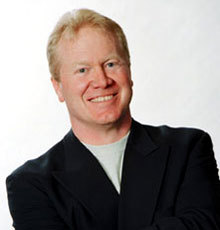 Hogs Haven: In your short, "Decisiveness in the Field," you cited your son's lack of focus in hunting as an example of distractions. The Skins clearly have a lack of focus with missed tackles, awful penalties, dropped passes...how would you correct this or prevent it from happening if you were in the Skins locker room?

Karl: That's a challenge because it's an internal thing. It can happen on a football team when there's confusion about what is your assignment. To be decisive, you have to know what you're supposed to do and have the capabilities/tools to do it. I think what happens a lot of times, especially when there is a lot of changes with coaches and coordinators like you guys have gone through, than the lack of decisiveness makes it so you make mistakes...it doesn't matter how big or fast or strong you are, if you don't know where you're going then you can't get there.

I'm convinced that's the problems the Broncos had [3] weeks ago against Baltimore. I saw indecisiveness across the board and my guess is the new, young coach put in way too much stuff and the guys didn't know exactly what to do. So, they were hesitant and their decisiveness was completely lost and you start making mistakes.

Hogs Haven: When a team is as injury-depleted and mismanaged as the Redskins, how do the players find motivation to continue battling when they are all but mathematically eliminated from the playoffs.

Karl: That's when the professional attitude takes over. If you have passion to be the best player that ever played the game like I did, that was my focus, it doesn't matter someone else wasn't living up to my standards. I had to live up to my standards. You do whatever you can to rally the guys. Point to all the positive things and sacrifices. Mentor the young guys and let them know what is important and why this is important to me and keep a long-term view.

Hogs Haven: So when things went bad in Denver, you never thought about going to a stable, successful team when your contract was up?

Karl: Not really. It was about the team here. I was not a guy who was a great athlete.  That's why I was the 310th pick of the draft and a college walk on. I made it because I was all about effort and not just the game situation but preparation and understanding my assignments. It didn't matter if we were behind or ahead or what our record was.

We had a flag football game at Mile High before they tore it down. They had the alumni for the Broncos versus the alumni from the rest of the league.

Bubba Parris and I had a long history. I played against him at Michigan. Bubba is a giant - 6'8, 360 lbs Offensive Tackle for San Francisco. For some reason we always played San Fran in pre-season, once every 3 years in the regular season, and one year I played against him in the Pro-bowl.  So, Bubba comes up to me before the game when no one else was listening, "Hey Karl, slow down...this is just for fun." The giant was afraid of me. He was afraid of me because he knew I gave full effort. It doesn't matter if it's pre-season, regular season, or the Super Bowl. He knew I was bringing it all the time. That was the nicest thing he could have ever said to me. You have to have that kind of attitude.

We then talked for 5 minutes about Coach Shanahan, which will be in tomorrow's post. Thanks again to Karl for his time. He clearly has a firm grasp on what makes a team successful, and he has excerpts from his motivational speeches on his website, which I highly recommend.

Well, it's very obvious that the Redskins are missing something in their recruiting. Leadership. A lot of us shared the sentiment that Cutler was a "whiner" and "baby," and that we didn't want a guy like that on the Redskins. It's clear now that was the right decision, but that's not what Snyder and Cerrato saw, and I'm sure they will continue to make these mistakes until a new personnel director is in command.

As for  Clinton Portis, I've always considered him a work-horse, though Joe Theismann sides with Mecklenburg questioning Portis' work ethic and leadership, via Steinberg:

Theismann: "There's been this, I don't want to call it a subliminal feeling, but this feeling that he hasn't given everything that he could give to this team in terms of coming in in shape, in terms of practicing...Well, we heard that also from Clinton, 'Hey look, I don't really need to practice, I know where I have to be.'

I said it on this show after he made that comment, I thought your offensive line has to know where they need to be so that you can be where you need to be. He's coddled all through training camp. It's like, 'Oh, let's not [tick] Clinton off.' And it's one of the things that Jason has mentioned."