Share All sharing options for: Pour Some Sugar On Me - Roger Goodell Establishes What the Fine Will Be If Dan Snyder Does Not Fire Vinny Cerrato

In case you missed it, the Tennessee Titans owner was filmed giving Buffalo Bills fans the ol' bird from his perch on Sunday. If you aren't a Bills player, fan or employee--or Roger Goodell--you probably laughed your ass off. Goodell dropped a $250,000 fine on Bud Adams today...which leads me to my headline...because if Snyder does not fire Cerrato, he will be essentially flipping the entire Redskins fanbase the middle finger, and should be fined at least the same $250,000 amount. 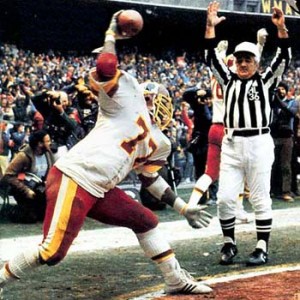 It's Dallas Week, so this week, instead of covering the league, I got 10 great memories of involving the hated Cowgirls. This is not an exhaustive list, nor is it any particular order. Feel free to add to this collection in the comments section below.

1) Darryl Grant's catch of a Dexter Manley tipped ball and subsequent touchdown in the NFC Championship game in 1982. It is one of my earliest memories of watching the Redskins period. I was barely 5 years old. The win over the despicable Cowgirls put us in the Super Bowl and the television images of RFK rocking are burned into my brain. Box score here.

2) Lavar Arrington tracking down Troy Aikman and sending him to the broadcasting booth. I admit this is kind of a macabre memory to love, but this one is great for multiple reasons. First, after so many Sundays of getting burned by Aikman over the years, it was satisfying (and fitting) that it be the Redskins that ended his career. Guys like him would and could play forever but they usually get knocked out of the league. Troy made the right decision to retire and as it turns out, he is one hell of a television broadcaster. He is generally fair and even-handed when he calls Redskins games, though since he is on the "A" team for Fox, we have rarely gotten him over the years.

3) Darrell Green's last game as a Redskin. The miserable Cowgirls were in complete disarray that week. Dave Campo's job was in question and the players on his sideline had completely phoned it in. We probably had no business beating that team but they were so obviously out of sorts it was hardly a contest. Both teams finished with losing records that year, but the going away present everyone wanted to give Darrell was a home victory over the pitiful Cowgirls. Box score here.

4) Brunell to Moss twice in the 4th quarter on Monday Night Football. I sat in stunned silence as the seconds ticked away in a loss that most likely was going to cost us the season. I was at a bar in Bethesda and as some of my buddies were ready to roll, I told them I kind of had to watch the end of this one. I had to witness the final whistle on my hopes for the season. The first touchdown to Moss was fun, but that feeling in my stomach that it was too little, too late was impossible to ignore. Then...no way...a seconddeep ball to Moss? With the lead in hand now, I was left to ponder the sick joke being played on us all that night: we come all the way back in the last minute only to lose to a field goal at the last second. The ensuing defensive stop was awesome, and everyone went crazy. Every car on the street was honking and every passerby was high-fiving. Box score here.

5) I would like to take this moment to remember a few moments from the pathetic Cowgirls' history that did not involve the Skins. Both were playoff games, and both put BIG smiles on my face. The first was back in 1998, in a playoff game against the Cardinals. Jake "The Snake" Plummer led the Cards to a huge win over Dallas. I might be mistaken, but it could have been their first playoff victory. Have the Cowgirls won a playoff game since then? Maybe they have, but I am not so sure. The second moment was more recent. When the Cowgirls had the game in hand against the Seahawks in the 2006-2007 playoffs, Romo was set to hold for a game-winning field goal. The rest is not only history, it created a whole new vocabulary. In prison, they now say, "Don't 'Romo' the soap!" I tell my two year old not to "Romo" his bottle. Cell phone users hate it when their calls are "Romo'ed".

6) The blocked field goal/Sean Taylor return a few years ago. It was a pretty classic slugfest but with the score tied 19-19, we found ourselves on defense with the low-life Cowgirls driving to put it away on the leg of Mike Vanderjagt. I remember it all too well...Jason Witten absolutely abusing Adam Archuleta for a huge gainer to set up the last-second kick. Once again, I found myself sitting in my seat awaiting the inevitable. I did not have the best angle to see the block, and once that ball was loose, it was tough to tell who had the ball. But then there was #21, making his way for the game-winner. Everyone was going nuts...but even within the moment, I knew it was overtime, since the clock was ticking down to zero during the play. Sean Taylor's head-whip was visible from my seat. It was an obvious call. When the referee announced we were going to have one more play from the end of the penalty, it was as if he actually announced, "Everyone is going to get laid." Nick Novak...47 yards...ball game. Box score here.

7) Darrell Green chasing down Tony Dorsett on Monday Night Football. This one I did not see live. I have seen it a million times though and it always makes me gawk. Forget the game itself...in one moment, one of the greatest running backs in the league was shown to be very mortal, and an unknown, undersized cornerback put himself on the map forever.

8) Jason Buck pushing the center into Troy Aikman, forcing the fumble and the ensuing Emmitt Smith gaffe that led to the Danny Copeland touchdown. I believe it was the season opener, on Monday Night Football with Mark Rypien under center for the Skins. I was a hot pretzel vendor at RFKstadium in high school and I had a knack for making sure I was selling pretzels in a section with the best view of the action on the field. On this play, I was actually behind the end zone that the Cowgirls were playing out of, and I saw the whole thing unfold. Jason Buck lined up over the Dallas center and on the snap, he bullrushed the dude right into Troy Aikman who never had a chance. Emmitt Smith made a huge bonehead error by not covering the ball (did he try and throw it or just muff it?) and we recovered for the touchdown. Only thing is, the refs never saw any of it. Danny Copeland, who had recovered the ball for the touchdown, had run almost to midfield celebrating. The refs were still looking in the pile of linemen for the ball. Everyone was yelling and pointing at Copeland, who then ran back and showed the refs the ball. I remember thinking, "Are they just going to take his word in this?" We beat the sad-sack Cowgirls handily, but that was pretty much the end of the "good old days" era. I think that was Richie Petitbon's debut? Box score here.

9) Cooley's 3 TD performance in 2005 to propel us to the playoffs. Mark Brunell threw four total touchdown passes in a game where we absolutely dominated the detestable Cowgirls. It was one of the best games I have ever been to at FedEx. Drew Bledsoe threw three interceptions and Clinton Portis ran for 112 yards to go along with the studly performance from Cooley. Box score here.

10) I'll make this one last since I know that the wretched Cowgirls were barely trying, but in November of 2007, we grabbed the final NFC playoff spot by holding Marion Barber to -1 rushing yards and the entire team to only 1 yard rushing. They actually brought Tony Romo back out for a series in the second half but quickly removed him to prevent a certain injury. Our defense was incredibly nasty that day. Box score here.

On these, I certainly stand to be corrected on any facts I may have misstated. I am very aware of some of the older games played between the two teams that featured such greats as Ken Houston, Sonny Jurgensen, Charley Taylor...I am hopeful that those of you out there who saw these games firsthand will share your memories.

Give Me The Numbers, STAT!

PSSOM Notes...Well last week I pulled for Jim Zorn to be given another year and we had quite the lengthy discussion about it. Nothing quite as controversial about this week's edition I'm afraid. It seems though that some of my article titles are not getting through to folks. Seriously, the fact that even one person "corrected" the Animal House reference yesterday is embarrassing. Last week, one poor soul didn't get the Def Leppard reference in the title of this weekly piece (this marks the 14th edition of the PSSOM series.) We need to do better. Finally, we have to stay positive after the big win and prior to the showdown in Dallas, but we can't just forget altogether the joke of a front office we have. If we reserve all commentary on that subject for losing weeks we not only come off as whiners, we become no better than mindless kittens, distracted by the ball of yarn that is each win. I'll keep it simple and I'll keep the message on point. The following list represents a possible example of a good front office--do your own compare and contrast with Vinny Cerrato's reign of terror:

By the way, I counted and these men have combined for 39 Pro Bowls. That does not include any from Haloti Ngata, who will get his fair share I am sure. I don't particularly care for the Ravens, but Ozzie Newsome is simply a class act. Every pick may not be a Hall of Famer, but only one of these guys didn't pan out (Boller). You want to hear the worst part? They have a stated rule that every year they draft at least one offensive lineman. Now, I don't know how that has worked out each year, but holy crap is that a refreshing philosophy.