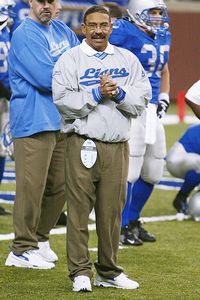 Allelujiah!! The pitcher of Kool-Aid is now half full! Like we've all agreed on for weeks here, Jim Zorn officially has help with the play-calling with the addition of Sherman Lewis.

[Lewis] coached running backs and wide receivers with the San Francisco 49ers, learning this style of attack from Bill Walsh. He moved on to Green Bay and was the Packers' offensive coordinator under Mike Holmgren for eight years, earning his second Super Bowl ring.

- As Holmgren's offensive coordinator, Lewis put together the game plan and ran the offensive practice.

- Lewis had play-calling responsibilities with the Vikings and the Lions. The 2000 Vikings reached the NFC championship game.

- Lewis has worked with Blache (in Green Bay) and Jim Zorn (Seattle) in the past.

My first thought is, "What a perfect fit!" while at the same time, "What took so long!?" The big question now is exactly how much pull he'll have in the play-calling with Zorn and Sherman Smith already in the captain chairs. Will Lewis be in the booth or just involved in game-planning? We'll find out on Sunday.