Daniel Snyder Was in the Running to Bring Baseball to D.C.

Share All sharing options for: Daniel Snyder Was in the Running to Bring Baseball to D.C.

As the hostility between Redskins' fans and Dan Snyder reaches new levels hourly, I was quite surprised to find an article stating Dan Snyder was one of the investors trying to move the Expos to Washington DC back in 2003.

[BET founder Robert] Johnson plans to purchase 51% of the Expos, leaving baseball with the remaining 49%. Over the next three or four years, he and the remainder of his ownership group, which includes Washington Redskins owner Daniel Snyder, would purchase the remaining 49% of the team. Johnson and Snyder would also form a joint venture to create a regional cable television sports network delivering professional football and baseball content to the Beltway.

My head is about to explode trying to visualize what the Nationals and Nationals Park experience would be like today if Snyder owned the Nats. Here's what I'm thinking:

- Inaugural season roster would have been in the $180 million range and included everyone in the steroids era, much like when Monty Burns put together his softball league. 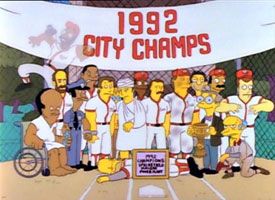 - Rain coats are not allowed in the stadium, but umbrellas and ponchos are available for a nominal $4 each.

- Local food varieties such as Ben's Chili Bowl, Five Guys, and Hard Times Cafe will be replaced by Johnny Rockets and Hooters

What other ones can you think of?