Sights and Sounds: Redskins vs Chiefs (Pics and Video) - Fans' Patience Has Boiled Over

Share All sharing options for: Sights and Sounds: Redskins vs Chiefs (Pics and Video) - Fans' Patience Has Boiled Over

Man, o man. Another woeful loss to a woeful team. The Fedex Field experience continues to get worse in ways I did not think possible. Losing is something I have become used to with the Redskins, but when the fun is taken out of the game, then what is left?

Our once proud section of 306, loaded with Redskins fans we enjoy seeing game in and game out are now gone. Tons of empty seats and a healthy mix of Chiefs fans. All that aside, the continued ads over the P.A. system have worn out my patience. I paid to see the game LIVE and avoid watching commercials. Nope. "This Washington Redskins first down is brought to you be Geico." At that point I headed to the bar. It was about five minutes before half-time, and I never went back. The Saints game was a lot more exciting, so why would I go back? Especially when I noticed TC was under center.

Post-game Fedex was another story. Meet John. He's a 6-year Redskins' season ticket holder and a fan we should be proud to know. He's the captain of section 439 and "sits" at the very last row at the top. He prefers the last row so he can stand up without having to block anyone's view. Sundays are meant to be glorious days, especially given the weekly commute to Fedex from Frederick, MD, John makes. John's method of cheering is by running up and down the aisle and riling up the burgundy and gold faithful (including that frigid, wet Dallas game when he had no shirt or shoes on). HAIL!

So, how do the Fedex yellow jackets treat him? They threaten to kick him out and tell him to sit down EVERY game. A caller in the Junkies this morning said that his 16-year old son put a paper bag over his head as he was leaving the game this week. The yellow jackets approached him and forcefully confiscated it. Why are the fans continually treated so poorly? John made it clear that no one was offended by his actions, and he would happily retreat to his seat if people asked him to, but cheering for his team he gets muted?

When you own a team that is ranked bottom 5 of the NFL, you can not afford to treat your fans like a filled diaper. I know this much...I will always be a Redskins fan, but this is my last year of paying for my season ticket. DirectTV, you just got yourself another NFL Ticket customer come 2010.

More sad pictures from my day at Fedex after the jump...and the new Miss Fedex contestant... 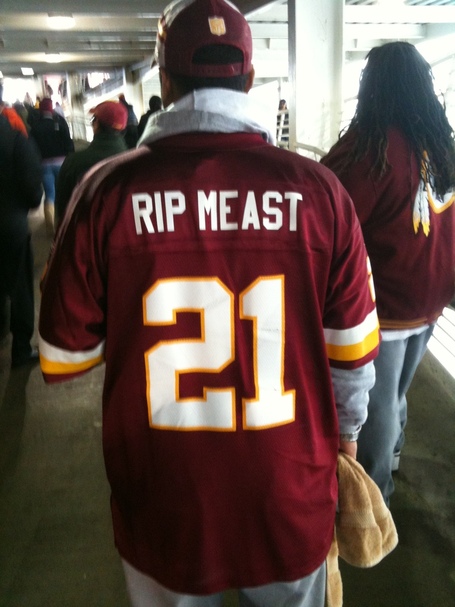 Best jacket ever. Unfortunately, he most likely will not be adding any dates this year. 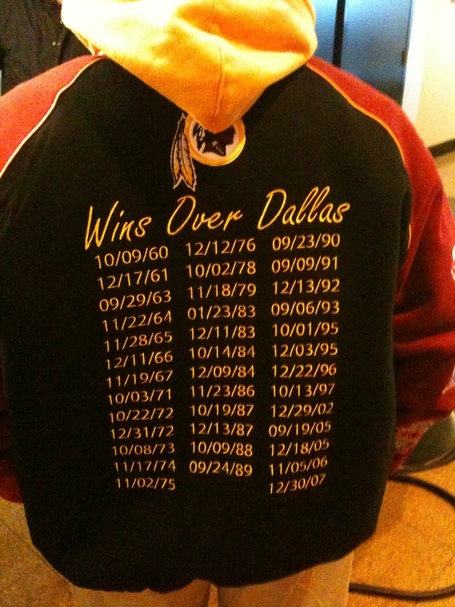 Further embarrassment. The Redskins are selling these to the fans. So not only do I see a crappy team in the field, let me buy some authentic memorabilia from our previous crappy team that we all want to forget. Starting price...$200. 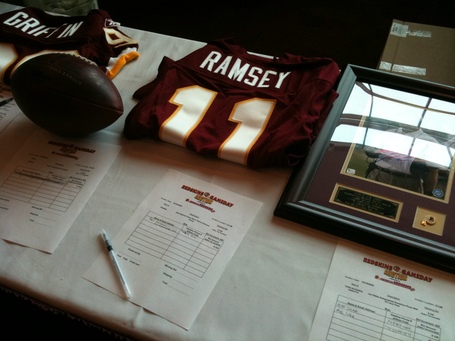 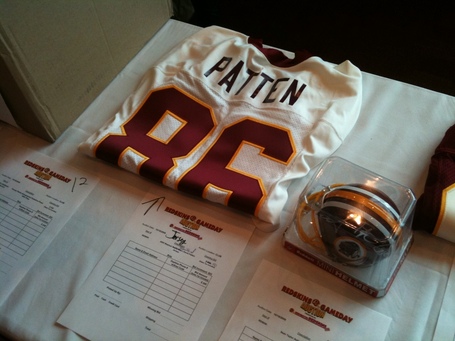 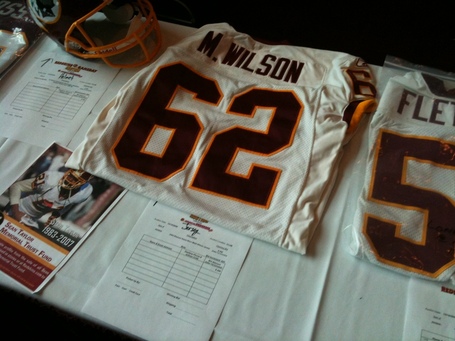 Wow, just when I thought the Ramsey jersey was bad. 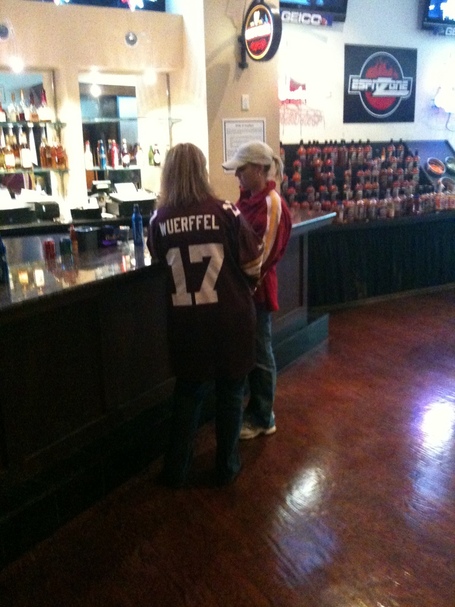 Yours truly after the final whistle. Leaving the club level I was so distraught, I had one of the escort ladies wheel me to the gates. Probably the highlight of my day. 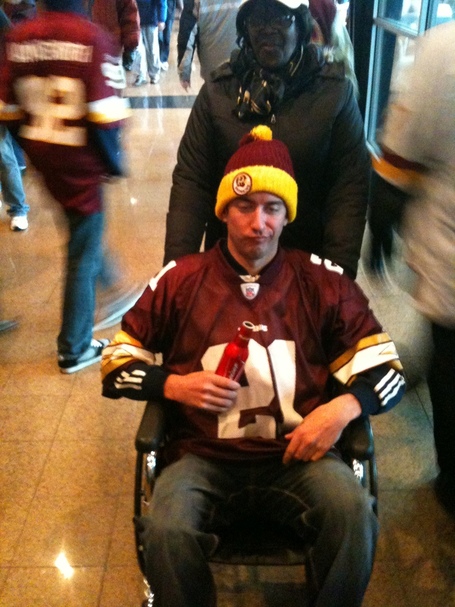 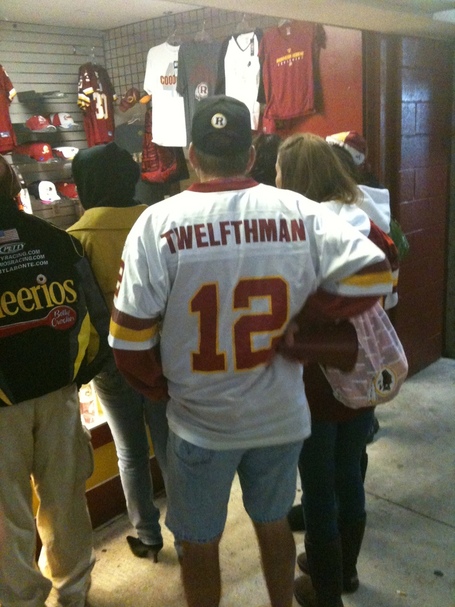 Loads of people in Giants gear. At half-time, there was a group of 5 Giants fan, all in their gear, taunting me to no end. Awesome...I get harassed at my own stadium by fans we're not even playing. 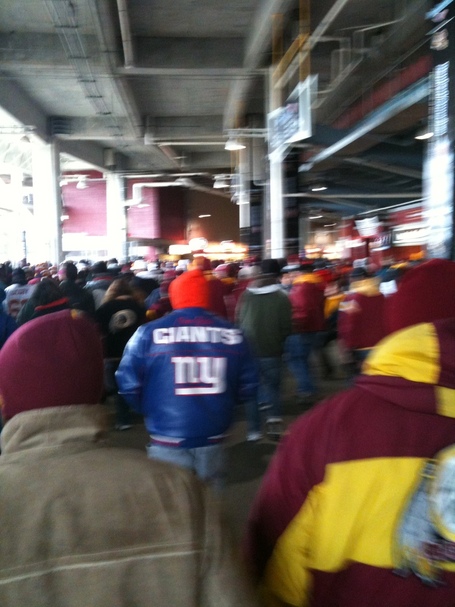 The new Miss Fedex contestant, Milly. Unfortunately, she's originally a Tampa Bay fan but was rooting for the Skins yesterday. Sabrina probably will coast through this week. 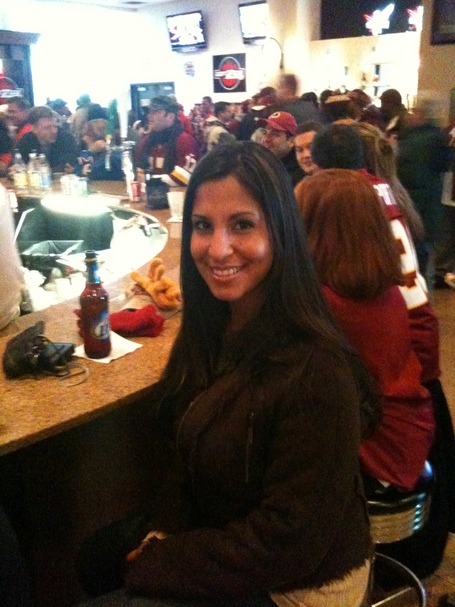