Interview with Buccaneers' Fan About the Redskins Game

Share All sharing options for: Interview with Buccaneers' Fan About the Redskins Game

My weekly piece interviewing the opposing team's fan has always had a hint of arrogance, but given the eggs the Skins have laid the last two weeks, I can't even make fun of an 0-3 Bucs squad!  My Uncle, Roger Vaughan, has lived in Tampa even before the team's 1976 inception, so I looked forward to including him in this weekly piece given his vast knowledge on the Bucs. He cc'd his son in law, Matthew, on my email chain regarding the interview who replied all, "My attitude towards the Bucs may be at an all time low. I don't know if I can muster the 'give a sh!t' to even answer the questions." Classic! That should give you an idea of how fed up the fan base in Tampa is. Sounds familiar, right?

Roger and I hit up multiple topics in our conversation, including: Haynesworth, firing their offensive coordinator 10 days before week 1, Doug Williams's progression as Player of Personnel, the fall of Jon Gruden, and Josh Freeman's combine.

Hogs Haven: A lot of things have happened recently in Tampa with Offensive Coordinator, Jeff Jagodzinski, getting fired 10 days before week one, your free agent QB you brought in getting benched after week 3, you change the defense but not the personnel...things appear in disarray...would you say that?

Hogs Haven:Is the team re-building or is it trying to find an identity?

Roger: They're trying to re-build. The new coaching staff basically inherited Gruden and [Bruce] Allen's players. So they didn't really draft these guys. They had a first round pick and they drafted Freeman who's a year or two out...if he even makes it. They benched Leftwich because he's a statue...he doesn't move. With the line they have, you can't have an immobile quarterback, so they went to a guy that can actually run, Josh Johnson. On defense, their third round draft choice, Roy Miller from Texas…they picked him b/c he's fits what they're looking for...an interior tackle. Jim Bates is re-doing the defense and wants a huge body in the middle. They couldn't get Haynesworth, who would have been the perfect guy for him, so they got this rookie in there. They have Chris Hovan who I think put on 20 pounds in the off-season to bulk up to play inside, but they don't have any outside pass rushers and those are the guys that really...in the Bates defense...are the keys to putting pressure on the Quarterback. When you don't get a pass-rush, that puts a lot more pressure on your secondary.

(Thought to self..."Yea, Skins fans know about terrible pass-rushing all too well")

Our starting Strong Safety Tanard Jackson got suspended the first four games because he didn't show up for a pee test. They were short-handed in the secondary anyway, so they have some real problems.

Hogs Haven:You say you are re-building, so why would you go out and pay $80-100 million for a Haynesworth? Especially when you don't have any pass-rushers to take advantage of the 1-on-1 matchups he creates?

Roger: I don't know. I don't think we were really in the hunt. I don't think he would have wanted to come down here. In any event, I think that was to make the fans feel better. We're $30 million under the cap right now. You could do a hell of a lot with $30 million.

Hogs Haven: How do you feel now about the Kellen Winslow signing? (A 2nd round pick, a boat load of money, and a questionable "re-building" move)?

Roger: They're on him already for not blocking and dropped passes. I don't think his head or heart is in the game. They're talking about his has a lack of focus.

(Thought: THANK GOD Gibbs was talked out of drafting Winslow in the war room.)

Hogs Haven: I read today that Raheem Morris has been calling out his players in the media.

Roger: Oh yea. He called out Kellen Winslow. He called out Gaines Adams, who's been a total bust. is one of the defensive guys on the outside that’s supposed to be a premier pass rusher. When you follow him during the game, he seems to avoid contact instead of making contact.

Hogs Haven: So you think it's OK for a coach to call out players like that through the media?

Roger: Yea! I think so! Nothing else seems to have worked. (laughing) 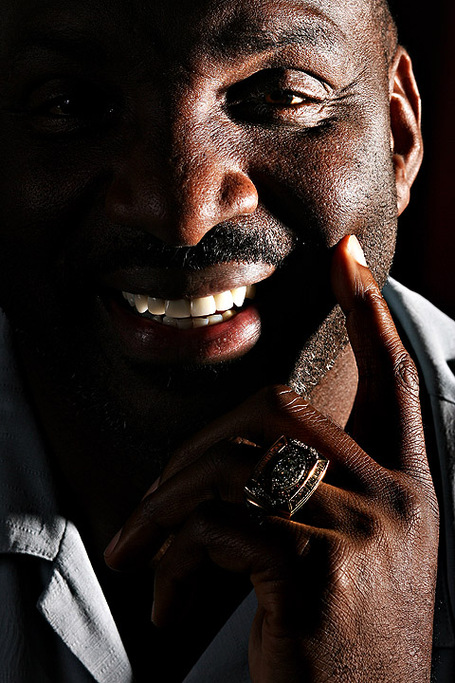 Hogs Haven: So, Doug Williams is the Player of Personnel down there. How is he faring?

Roger: Yea. He's the guy that went to the combine with Gruden. They were on opposite sides of the field when Josh Johnson was doing his thing. He ran something like a 4.53 which is damn good for a Quarterback, but his passing was terrible. Williams had been very high on this guy, and Gruden kept texting Doug from the other side "When is this guy gonna show up?" That article was in the St. Pete Times this morning.

(Johnson couldn't even throw a spiral in the combine, which is why he slipped to the 5th round. Doug INSISTED he was a steal in that round and to use their pick on him.)

Hogs Haven: I remember you saying how much you disliked Gruden, but the Bucs still have ties with him?

Roger: He's still tied to the players. I think they owe him another year's salary. They're praying he gets a coaching job so they don't have to pay him, but they do have to pay him even though he's a Monday Night [Football] guy. I didn't watch much of the Monday night game [CAR @ DAL], but they say Gruden was really auditioning for the head coaching job. That's what the talk radio in Tampa was saying. How much he loved Romo. He apparently was saying a lot of favorable things to the Cowboys to get Jerry interested in him. He was not a very popular guy here. The players would say that Gruden will tell them one thing and he'd do another. He seemed to play favorites.

Hogs Haven: How so?

Roger: He used to say he couldn't put Galloway and Bryant on the same field at the same time, which is baloney. If you're the offensive genius that has a playbook that looks like the New York phone books, you can do anything you want to do. Galloway got in his dog house. He ran off Keyshawn. He ran off Joe Jurevicius. He's run off a lot of players here.

He put Michael Clayton in the dog house. He caught 80 balls his rookie year, then he wouldn't even throw to him in practice. He basically humiliated Chris Sims.

Hogs Haven: How did Josh Freeman look in pre-season?

Roger: He throws the ball well. I think in the last game he made a 30 yard touchdown. When the protection broke down, he took off. He looked alright. He doesn't look like Roethlisberger, but he's the gate-keeper for Josh Freeman. Until Freeman's ready, this guy goes in and absorbs the blows.

Hogs Haven: So what’s your prediction for Sunday?

Roger: If the Redskins don't beat us, they should just tank it in, play the reserves, and build for next year. And Zorn should look elsewhere.

Hogs Haven: You think the Redskins will score over 20 points?

Roger: I don't know if Campbell throws a good long ball or not. We've given up a lot of long touchdowns over 40 yards (though we didn't last week). How is Zorn doing down there? Is he on the hot seat?

Hogs Haven: Oh yea, but he wears so many hats being the Head Coach, OC, and QB Coach.

Roger: You could bring in Matt Millen!!