The Redskins have sure chased down some doozies. Sometimes it takes a little time to appreciate just how bad some of the free agents we signed were. You know, to be able to stand back and really smell the festering stink that emanated from the short-lived careers of certain men who came through for a cup of coffee and were gone.

Then you have the first two guys in our brain-melting series asking you readers out there who was a bigger bust for our franchise. We're not exactly comparing apples to apples all time. But when it is apples and oranges, you can bet both are rotten and decomposing. 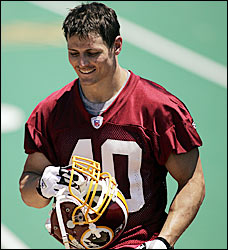 The Redskins made him the highest paid safety in the NFL, of all time. He recorded 49 solo tackles, and had 11 passes defensed. He did have 1 sack. Also, he is married to Playboy model Jennifer Walcott. He was a complete liability in the passing game, and the only reason I can imagine anyone bought his jersey is because it got a lot of airtime...from the back...as he chased down receivers that burned him. Coincidentally, we signed him as a free agent safety for the most money ever given to a safety and let Ryan Clark go for...well, for less than the most money ever paid to a safety. 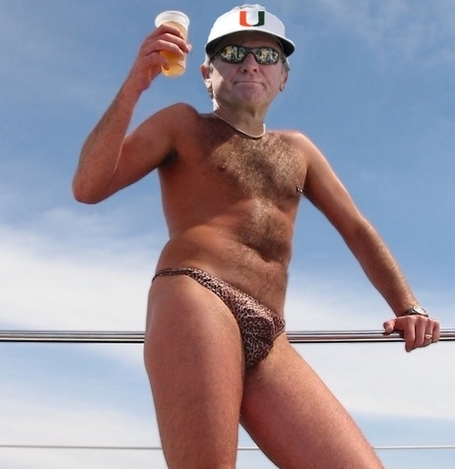 This picture was taken during the season, and not on a bye week. His (lack of) work ethic in the pros was legendary. His (lack of) attention to detail and discipline was second to none. Gibbs kept a cot in his office so he could burn the midnight oil and grab a few hours of sleep in the wee hours of the morning. Spurrier kept a cot in his office so he could burn the noonish oil and grab a catnap before dinner. He should be charged with a FELONY for what he did to Patrick Ramsay. He routinely left too few guys to pass protect, and what's worse, he didn't mind that the world knew it. Every team knew how to get to our QB. Ramsay spent more time on his back than Lindsay Lohan. It was criminal. Oh yeah, and he's a QUITTER. Then again, good riddance.

Have at it. There is a lot of other ammo out there to be used on these guys. And I know you're angry. But which one of these guys was a bigger bust as a Redskin, and why?