Mel Kiper updates his draft board...

Share All sharing options for: Mel Kiper updates his draft board... 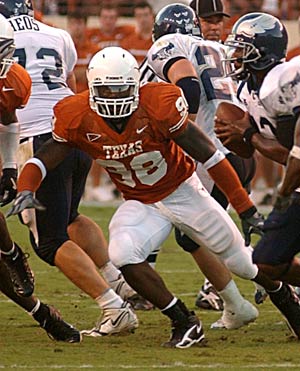 Mel Kiper Jr. updated his mock draft board yesterday and has the Redskins selecting Brian Orakpo, the defensive end from Texas.

Scouting reports on his Senior year, courtesy of fftoolbox.com:

10/16 Update: No defensive lineman is having a year better than Orakpo. After just six games, the defensive end has tallied 12 tackles-for-loss, eight sacks and 16 quarterback hurries. Orakpo went up against Oklahoma offensive tackle Phil Loadholt in the Red River Rivalry and absolutely dominated the big lineman. That alone nearly boosted Orakpo into the first round.

12/17 Update: Orakpo continued his dominance during his senior season and continued to rise up the draft boards. The defensive end finished the regular season with 10.5 sacks and 18 tackles-for-loss. For his efforts he garnered a plethora of postseason accolades. Being named to the AP first-team All-American squad and being the Big 12 Defensive Player of the Year are both very nice, but winning the Bronco Nagurski Trophy is even better. Orakpo is well on his way to a successful career in the NFL.

Here is some video of him recording a sack in the 2009 Fiesta Bowl. He's the DE on the 3-man rush at the top of the screen:

What are your thoughts if the Skins selected him as a 1st round pick instead of trading down? I'm rather confused with this pick since Jason Taylor and Andre Carter are both still Redskins at this point.