When I think of some of the most ridiculously stupid arguments I have ever been in, and I have a lot to choose from, arguing over what compensatory draft picks the Redskins should get sits high on the list. Be careful, I know what you're thinking: "What's the debate? Where's the mystery? It's a straight formula based on things you know."

It's a 'proprietary' formula. Meaning you don't get to know it. And that is how they like it. The picks are awarded based on the net change of a team's free agent haul, and we know variables include player's salary, playing time, and postseason honors with his new team--salary being the main factor. It is entirely possible that a handful of picks are used in swanky backroom poker games to determine where they land. After that of course, picks cannot be traded. Sure, there are some obvious ones. But there are some real head-scratchers.

Still, it is just impossible not to venture a guess as to what the NFL will award the Redskins at the league meetings next month. What is it going to be? The sooner we have a consensus, the sooner we can figure out what kicker we will be drafting. Don't act like you don't have it all figured out. Closest to the pin on this one wins this shirt: 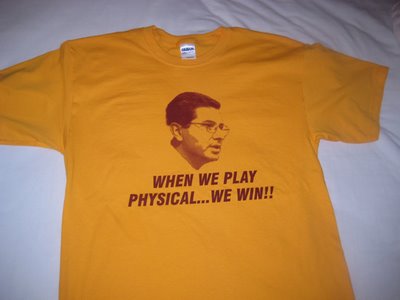 P.S. If you think Vinny isn't capable of drafting a kicker again this year, you should be wearing a helmet at all times.