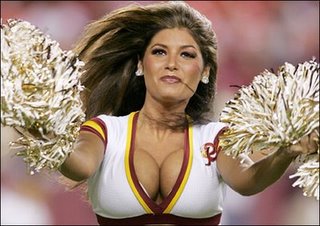 So now that my 401K is about 50% of what it was 6 months ago, I have remained optimistic that things are not that bad. Well, that all changed just now. According to the Washington Post, the Redskins have laid off 20+ staff positions, including cheerleading positions. "The revenue from tickets and season tickets was not where it needs to be," according to one of the laid off employees. How is that possible with a sold out stadium and waiting list? Several of the users' comments, including ours, say it best:

"No wonder we didn't go after Cowher..... Hell we can't even afford to keep the cheerleading coaches.....SHYTTT!"

"This is typical of this organization, they throw millions out the window on bad talent. But then worry about, who has the key to the coke machine."

"When a recession hits, it gives rich people all the excuses in the world to start claiming it's a recession and payroll needs to be reduced. This is a prime example........"

"Monkey see, monkey do. Too bad they can't apply that to free agents, and the draft."