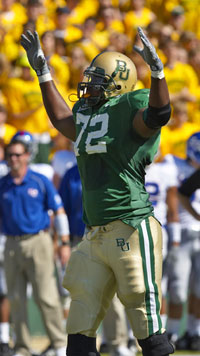 I personally do not enjoy talking about draft possibilities unless the team in discussion has a top 10 pick or multiple first/second round picks. Too much happens with trading, and the flashy well-known players are gone after the first round. Having said that, I ESPECIALLY am not in the mood to talk about the Skins draft picks since we only have 4 of them: 1st, 3rd, 5th and 6th. Vinny sold the Skins' 3 other regular picks: 2nd round (trade for Jason Taylor), 4th round (trade for Pete Kendall), and 7th round (trade for Erasmus James). In addition, the Skins 6th rounder in 2010 is gone because of the #55 trade.

A lot of the big mock draft sites have the Skins selecting Jason Smith, the OT from Baylor, with the 1st pick. Since we don't have a #2 pick, it is GUARANTEED we will be trading this pick down for hopefully a late #1 and a #2 if not two 2nd round picks. If mock drafts had black X's over our 1st round pick, then I would be more inclined to read on. Otherwise, we might as well be talking about fantasy LPGA. Selecting a single lineman and nothing else in the first 2 and 1/2 rounds leaves the Skins with the same woeful offensive and defensive lines as last year.

Lastly, I am very thankful the NFL playoffs have started, thus ending fantasy football's season. I personally love fantasy football. I just detest how people I don't know feel it's imperative to tell me all about their team. There's always that one guy at every Christmas party I get stuck in conversations with, "If I had started McFadden over Jamal Lewis in week 6 then I would have made the playoffs! And I originally offered a trade week 4 to my friend, Brian, for Cutler, but..." (gun to my head gesture)