Devin Thomas: Who to believe?

Share All sharing options for: Devin Thomas: Who to believe? 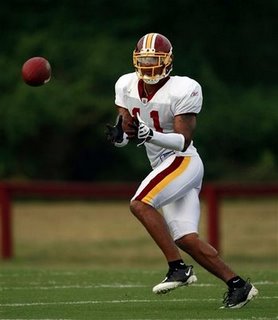 Jason La Canfora, an "insider" beat writer for the Washington Post had some strong words in his season review of Devin Thomas:

"..he did not do enough to get himself physically and mentally ready to play, and many in the organization wonder if he ever will..."

"Thomas has already talked about the need to get away from football for a while, which, for as little as he played, is alarming."

"If the Redskins had taken Eddie Royal, who fit the mold of the big, target receiver they were seeking..."

"Moss is no longer one of the elite receivers in the game. His size is a detriment and unlike, say Carolina's Steve Smith, he isn't going to beat Cover-2 for deep plays with any sort of regularity"

A few things here. For starts, Eddie Royal is 5'10 and 182 pounds. He is exactly who we do not need. Secondly, Moss is definitely still one of the elite players in the league. When the QB has no time to let a play open up and defending teams only have to worry about stuffing the run and getting to the QB, that greatly reduces Moss's abilities to get down field.

All that aside, redskins.com just released their own article on Devin Thomas, with quotes from Devin and Coach Zorn which are flat-out opposites to what Jason is reporting:

"I have the offseason to get things right and get ready for next year."

"Devin has been playing faster," Zorn said. "[I’m] feeling good about where he is going and the speed that he is playing with. He’s more confident."

A lot of people, La Canfora included, like to point how later draft picks Eddie Royal and DeShaun Jackson were able to make huge contributions their rookie years. True, but that does mean not Devin Thomas is a bust. He missed most of pre-season with a hamstring injury, which is exactly where the rookies have their time to learn the system, the speed of the NFL, and iron out mistakes. No matter what anyone says, everyone had Devin Thomas as the top WR on their draft board at our pick.