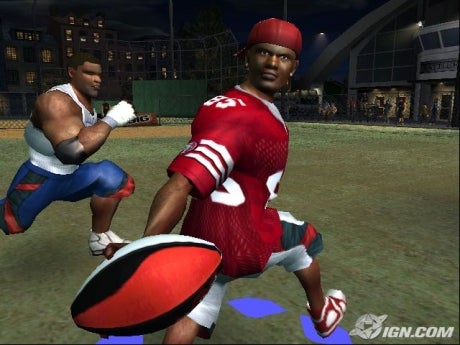 Oh look, his gloating is going to get him blindsided... in a video game. (Image from here.)

Oh, and before even officially joining the team, he's already causing trouble.  From the article:

"Rex Grossman is the starter," Lloyd said during a conference call.

The Bears have said that Grossman and Kyle Orton will compete for the starting job next season, and Lloyd apparently jumped to a premature conclusion. When asked who told him Grossman would start, the receiver backpedalled.

Congratulations to the Bears.  I hope they enjoy every minute and every dollar of the one year / $3 million dollar deal (with another $1.5 million in incentives possible) they have with Lloyd.

I know he will work hard and do absolutely nothing to stir up the club and will fit right in and be onboard with a team-first attitude to help the Bears in the NFC North.

Any fan of the Bears reading this... I'm so sorry.