Redskins: Scouting Punters for the 2009 Draft

Share All sharing options for: Redskins: Scouting Punters for the 2009 Draft

Now that the Redskins are looking forward to the 2009 draft, Hogs Haven thought it would be beneficial to help out the Redskins' Front Office in scouting this year's punters. Since punters qualify for 6th round picks, it only makes sense we do our homework. Cerrato publicly stated there is a 0% chance we draft a Punter this year, which I believe, but I also believed the front office when they originally said we had 'no interest in Cutler.' Moving on, here is this year's top class ranked in order: 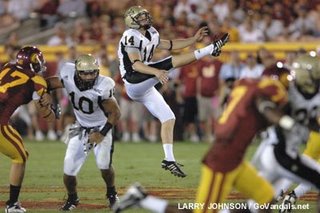 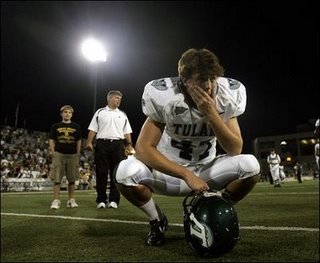 Thevenot, a Punter/Kicker from Lake Charles, in one game, averaged 56 yards per punt on three attempts for 168 yards, placing one inside the 20. He also connected on field goals of 32 and 43 yards while converting all four PATs. His 43-yard field goal with 4:01 to play was a season-long and his 71-yard punt was the longest by a Green Wave player since 2003. 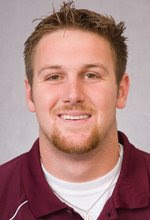 Learning from the Past (in all seriousness):
There is an amazing truth I discovered about last year's NFL draft, which is rather frustrating. Like the Redskins, the Broncos had their eye pre-draft on landing a solid Punter.

There were 4 punters that finished with a higher average than Durant Brooks (45.06 avg on 65 punts) coming out of college...the winner being Kevin Huber of CIN (46.88 on 57). The #2 overall punter of the NCAA in the 2008 draft was Brett Kern of Toledo. One of the reasons the Broncos liked Brett Kern was that he kicked in the MAC, your basic cold-weather conference. He thrived under those circumstances, leading the nation at one point in average yardage as a Senior. Playing patient, the Broncos got their guy. Guess what round the Broncos drafted him? FREE AGENT. They never had to use a pick. For all kickers that had 25 or more punts last year inthe NFL, Brett ranked the 5th best punter in average kick (46.7 avg) and 5th in fewest touchbacks (13).

Kern's stats for DENVER this year:

To me, that is pretty embarrassing for the Skins. Durant didn't have consistency even when the weather was still warm, but I can't imagine his average yardage would have been impressive in the December games either. I sense that Durant Brooks was one of those "impulse buys" the Redskins love so much. Only two and half more weeks until shopping season resumes!