If Sarah Palin ran the Redskins

Share All sharing options for: If Sarah Palin ran the Redskins 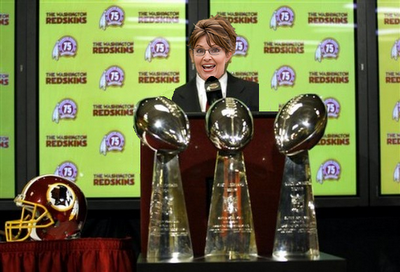 Amazingly Ahern did not get crucified for posting our thoughts on an Obama-led Redskins era, so as promised, we tried to sit back and think the same if Sarah Palin (God help us) took over control:

- Courtesy binoculars for everyone in the top 15 rows to keep an eye on Russia.

- Free Gun pamplets with the purchase of any beer or size childrens meal.

- Green Lots A-C will be closed for 4 years for potential exploration of oil and natural gas.

- Redskins renamed to the Washington Mavericks.

- New rule that no less than 75% of the salary cap must be spent on defense.

- Similar to how the Philadelphia Eagles show Sylvester Stallone before team intros, the Redskins will bring Joe the Plumber out to rile the crowd up.

- Moose and Venison burgers to replace hot dogs in all concessions.

Results: After a dreadful 2 years and 0-32, Redskins fold and Goodell OK's the team to move to Oklahoma City. (And no, the team is not renamed to the Bombers).