If Obama Ran the Redskins

Share All sharing options for: If Obama Ran the Redskins 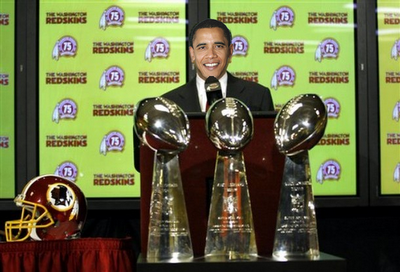 So as U.S. begins life with Obama, I couldn't help but think what life would be like as a Redskins fan if Obama took over for Daniel Snyder for 4 years. Like with W., I think lots of changes would come swiftly, including:

- 25% increase in price for club & lower level tickets so that upper deck tickets can be given away to those making under $25,000 per year.

- Special parking lot closer to the stadium for hybrid and alternative-fuel cars. Air hoses will be attached to each light post so that every driver can inflate their tires to get better gas mileage.

- Ban on all charcoal grills.

- Current Guantanomo detainees released and brought up to Fedex to help out with concessions/vending.

- All home games will be day games to save electricity.

- Haftime there will be no band and everyone can take a moment to turn and pray to the God of their choice. A special flag will be added at the top of the stadium to highlight which direction is West towards the Mecca.

- Video above all urinals showing looping infomericals of why stem cell research is good.

The following people will be relieved of their duties and replaced by:

PS - Check back later in the week for our take on Sarah Palin's changes as the Redskins owner. We're pretty sure the team would be bankrupt by year two.