Share All sharing options for: Big Win for Galludet 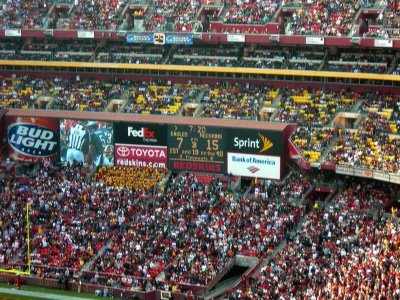 It is no big secret that I am not a fan of Dan Snyder. I buy all my Skins gear on Ebay and for the most part try to bring airplane bottles into the game as to give him as little of my $$ as possible. So when something comes up in the news regarding his money-sucking ways, I am quick to pounce. However, in this latest lawsuit against Snyder and the Skins, I am taking his side.

In short, three longtime Washington Redskins deaf fans filed a suit against WFI Inc. and Pro Football Inc., (the stadium’s owner and operators) that the facility is not "equally" built to cater for the deaf as it is for the rest of us. "Among other things, the plaintiffs want all announcements, advertising, song lyrics and video replays captioned within sight of the JumboTron displays at either end of FedEx Field."

This to me is a bit ridiculous. Why would you want to see more advertising than is already there? As I said to my friend, "Fedex is a vomitorium of advertisements." The former Jack Kent Cooke Stadium also has one of the worst and smallest scoreboards in the league. Having to add closed captioning for every thing is absurd.

I think the key thing to keep in mind is that this stadium was built before everyone was mindful about those with disabilities. It is definitely not too much to ask to add captioning on the banner screens for first downs and all stadium announcements, but advertisements and song lyrics?!? Are you kidding me? What? Are you going to sing along?! How about we get mimes on the field to act out the song too.

The plaintiff first brought this up in 2003, so the stadium has been pretty much ignoring their requests….sounds about right. In related news, parking will be increased $10 per game next year to pay for the lyrics of "Who let the dogs out" to be captioned on the scoreboard.